The more than 1,700 passengers would remain on board for now and the quarantine could be lifted by Thursday. 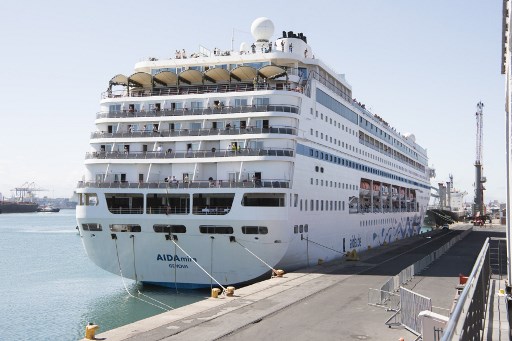 The AIDAmira, an Italian registered cruise ship carrying mostly German tourists, is docked in Cape Town harbour, and is being quarantined due to several suspected COVID19 cases on board, on March 18, 2020, in Cape Town. (Photo by RODGER BOSCH / AFP)

Loud cheers rang out when it was announced on Wednesday that the the six passengers quarantined on the MV AidAmira passenger liner tested negative.

More than 1,700 passengers are stuck on the ship, which is docked in Cape Town, after not being allowed to disembark.

The six were quarantined after coming into a contact with a cargo ship crew member, who had showed symptoms of the coronavirus.

This was announced at a media briefing by Transport Minister Fikile Mbalula and port officials on Wednesday afternoon.

“We got notification that the six passengers we had isolated have now come out clear,” acting SA Maritime Safety Authority chief executive Sobantu Tilayi said.

Tilayi said the more than 1,700 passengers would remain on board for now and the quarantine could be lifted by tomorrow, but only after the protocol for them to disembark had been agreed upon by a Joint Operations Committee (JOC). He suspected that many would opt for air travel to return home.

In a statement on Tuesday, Transnet National Ports Authority (TNPA) said a crew member on board the MV Corona cargo ship had started showing symptoms of the virus after the vessel departed the Cape Town harbour on 11 March.

On 13 March, the master of the vessel contacted port health officials, requesting the vessel return, so the man could be isolated and quarantined.

It was later discovered the crew member and a colleague on the ship had flown into South Africa from Istanbul, Turkey, on 9 March and that six passengers aboard the MV AidAmira, which operates between Cape Town and Walvis Bay, were on the same flight.

The master of the MV AidAmira immediately quarantined the six passengers as a precautionary measure and, following a joint operation by the TNPA Harbour Master, the SA Maritime Safety Authority, Port Health and a specialist doctor, the vessel was allowed to dock, but crew and passengers were not allowed to disembark.