About 72 families, who are residing in tents, are expected to occupy their new homes - which take an hour to erect - in the next few days. 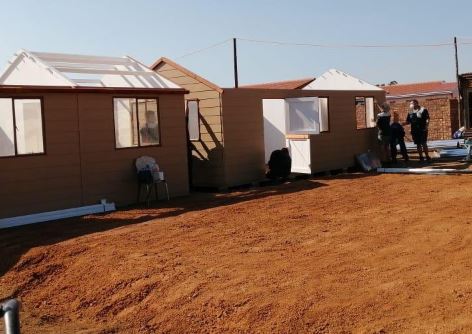 Temporary wooden houses could soon be rolled out across Johannesburg to ease densely populated informal settlements and allow proper physical distancing as the government works towards phasing out the national lockdown.

Human Settlements Minister Lindiwe Sisulu said the newly piloted project is being implemented at an informal settlement in Wilgespruit in Roodepoort.

On Friday, Sisulu and City of Johannesburg Mayor Geoff Makhubo visited the area, where they addressed residents about the importance of the new temporary housing development.

[PICTURES ????] Progress on site ????????where Temporary Residential Units are being built. pic.twitter.com/rgbkucYjuw

About 72 families, who are residing in tents, are expected to occupy their new homes in the next few days.

It takes an hour to complete one unit.

Sisulu said the government decided to do something about physical distancing in disadvantaged communities, especially informal settlements.

[PICTURES ????] I have arrived at Plot 323 in Wilgespruit to visit the site where Temporary Residential Units are being built to accommodate the residents of who have been living in tents for almost four years. pic.twitter.com/ir31EP7oGp

“We want to do it in such a way that we don’t disrupt communities. This is what we call temporary shelters that everybody will be happy to live in. We want to provide necessary decency, privacy, and don’t disrupt them.

“The community here is very happy with what we are doing. When the first was completed in less than an hour, they all came and cheered because they have never seen such a thing before.

“We are going to roll this out wherever communities accept this project. It will also be voluntary and, if anyone wants to stay in their shelter, they are free to stay,” said Sisulu.

“We are going to amend the policies for this interim period as we go along to take best practice and sell it to other provinces,” said Sisulu.

Makhubo later promised that a similar project will be implemented in many of the overpopulated informal settlements across the country.