The former president's son has criticised government's way of curbing the spread of Covid-19, explaining how he would have done it instead. 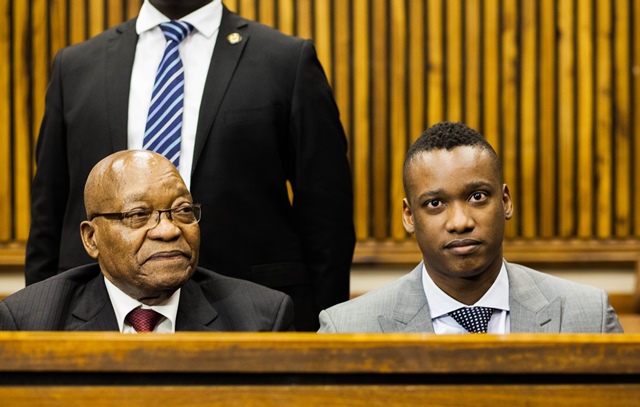 Duduzane Zuma sit next to his father former president Jacob Zuma at the Randburg Magistrate Court in Johannesburg. Duduzane Zuma is facing a culpable homicide charge after crashing into a taxi in 2014.

Former president Jacob Zuma and his son Duduzane Zuma have published the second part of their interview in which they discuss the 2017 ANC conference, Deputy President David Mabuza and and the decisions taken to curb the spread of coronavirus in the country.

Duduzane criticised the way government had handled the lockdown, saying he would have done it differently. While he agreed with the decision to close the country’s borders, all other decisions had been cut and paste and had disastrous effects.

According to him, a civil unrest of fed-up citizens was now on the cards.

“A lot of the solutions we bring to the fore are reactionary and pure cut and paste. South Africa is a developing world; certain issues that exist in the country may not happen in other countries.

“A social civil unrest is on the cards, whether we like it or not. How do we expect people not to fight for their families? We don’t condone violence and activities of looting, but how are we supposed to survive?

“Announcements that have been made are based on stakeholders but people on the streets are not included in those decisions. If you open borders for wine export, then what about the person who runs a car wash? If lobbying can happen where businesspeople can get their way, who is lobbying for the aunt and uncle on the ground?

“The SANDF is excessive and has created a mistrust between communities and law enforcement. Isn’t the military supposed to be the last line of defence? Now they’re on the ground and intimidating people.

“But now you have people looting, not even protesting, but people trying to get their hands on food, so there will come a time when they will clash.

“If it were me, I would not have locked down in the sense of locking down the country. I would have done it partially in the places that matter – points of entry and exits, ramp up the screening and testing and get everyone to practise social distancing, sanitising, washing their hands. Have everyone wear face masks and continue. Yes limit the number of people that go to the workplace and travel on public transport,” he said.