The World Health Organization's vaccine advisers on Monday recommended people with weakened immune systems should be offered an additional dose of all WHO-approved Covid-19 vaccines. 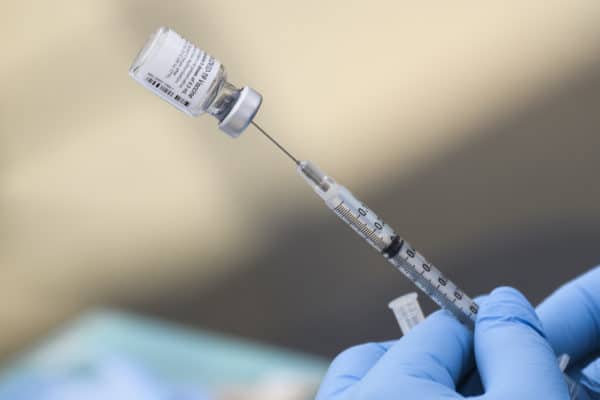 (FILES) In this file photo a syringe is filled with a first dose of the Pfizer Covid-19 vaccine at a mobile vaccination clinic at the Weingart East Los Angeles YMCA in Los Angeles, California on August 7, 2021. - President Joe Biden will announce on September 22, 2021 the US plans to donate an additional 500 million Pfizer-BioNTech Covid vaccines to the rest of the world, bringing its total commitment to 1.1 billion, officials said. Biden will relay the news at a virtual summit to be held on the margins of the United Nations General Assembly, where he will challenge world leaders to vaccinate 70 percent of every country by September 2022.The donations are being made "free of charge, no strings attached," a senior administration official said ahead of the meeting. (Photo by Patrick T. FALLON / AFP)

As of Monday, South Africa has recorded a total of 2.912,346 positive cases of Covid-19, with only 201 new cases identified since the last report, the National Institute for Communicable Diseases (NICD) has announced.

This increase, according to the institute, represents a 3.3% positivity rate.

As per the National Department of Health, 29 Covid-19 related deaths have been reported, bringing total fatalities to 88,346 to date.

17.988,526 tests have been conducted in both public and private sectors.

There has been an increase of 52 hospital admissions in the past 24 hours.

The World Health Organization’s vaccine advisers on Monday recommended people with weakened immune systems should be offered an additional dose of all WHO-approved Covid-19 vaccines.

The Strategic Advisory Group of Experts on Immunisation (SAGE) stressed it was not recommending an additional booster dose for the population at large, which is already being rolled out in some countries.

The WHO wants a moratorium on booster doses for the general population until the end of the year to prioritise first doses in the dozens of nations starved of vaccines.

The WHO’s target of getting 10 percent of the population in each country fully vaccinated by the end of September was missed by 56 states. However almost 90 percent of high-income countries hit the target.

SAGE said it would review the issue of general booster doses on November 11.