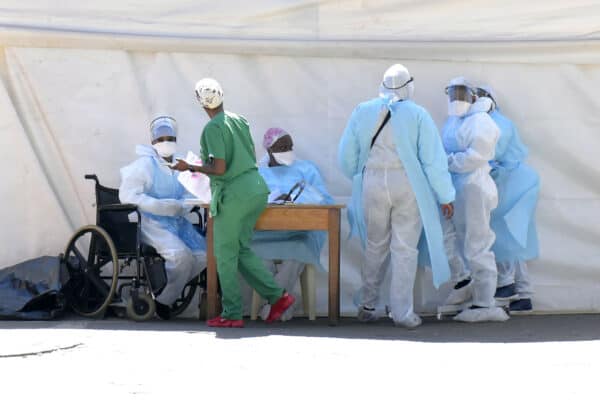 Health workers are seen at a hospital on 5 August 2020. Picture: Neil McCartney

As of Thursday, 17 February, the cumulative number of detected Covid-19 cases in South Africa is 3,652,024 with 3,056 new cases identified, the National Institute for Communicable Diseases (NICD) confirmed.

This represents a 8.8% positivity rate.

There were 92 hospital admissions in the past 24 hours.

22,796,653 tests in total have been conducted to date in both public and private sectors.

The total number of vaccines administered in the country so far stands at 30,858,874 as of 17 February.

Hong Kong’s hospitals buckle under an Omicron-fuelled wave with patients shivering on gurneys outside overflowing wards.

Beijing Olympics organisers say there were no new Covid cases in the Games’ “closed-loop” bubble for the first time, hailing the success of China’s strict approach.

Canadian police issue an ultimatum to protesters who have been choking Ottawa streets for 20 days to leave the capital, as provincial and US state leaders call for an end to the cross-border vaccine requirement that sparked the trucker-led movement.

The world is becoming “better prepared” to deal with future variants of the virus, the CEO and co-founder of German vaccine-maker BioNTech tells AFP, as the company works on an Omicron-specific shot.

Japan will ease its strict virus border rules to allow students and businesspeople into the country from March, but tourists will still be barred.

Coronavirus has killed at least 5,848,104 people since the outbreak emerged in China in December 2019, according to an AFP tally compiled from official sources Thursday at 1100 GMT.

Taking into account excess mortality linked to Covid-19, the WHO estimates the true death toll could be two to three times higher.