Freeing the boys and their coach from the still-submerged cave complex is expected to be a protracted process, fraught with challenges. Thai soldiers take a break as rescue operations continue for 12 boys and their coach trapped at the Tham Luang cave at the Khun Nam Nang Non Forest Park in the Mae Sai district of Chiang Rai province on July 4, 2018. A new video of a youth football team trapped in the bowels of a Thai cave emerged July 4 showing the boys laughing and saying they are well after their astonishing discovery by divers nine days after going missing. Picture: AFP Photo / Ye Aung Thu.

Thai rescuers vowed to take a “no risk” approach to freeing 12 boys and their football coach from a flooded cave, as fresh footage emerged Wednesday showing the team in good spirits following their astonishing discovery nine days after going missing.

Freeing the boys from the still-submerged cave complex is expected to be a protracted process, fraught with challenges for a group who are not divers and some of whom are believed to be unable to swim.

With a country glued to the rescue mission, authorities insist they will only move the boys once their safety can be guaranteed, even though monsoon rains are predicted to soon resume.

“We have to be 100 percent confident that there is no risk to the boys before we evacuate,” Chiang Rai provincial governor Narongsak Osottanakorn told reporters on Wednesday. 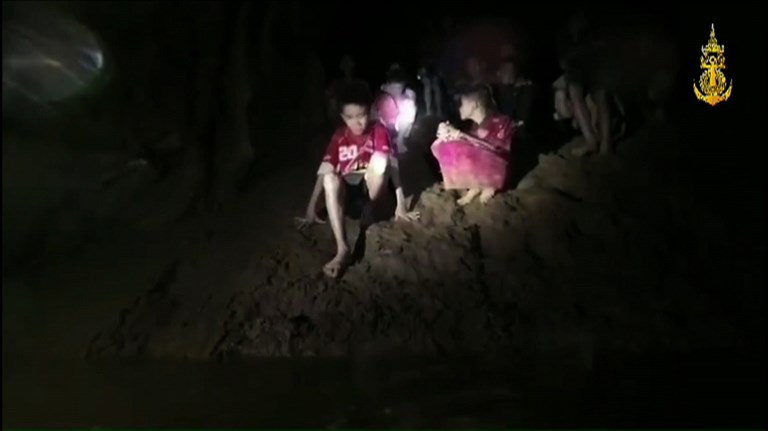 “We will take care of them like they are our own children,” he said, adding efforts to install a telephone line failed late Tuesday, but food, medicine and relief gear continued to be ferried into the caves.

Authorities were also pumping out water round-the-clock, aware of the bad weather forecast in the days ahead.

“We want to evacuate all 13 people as soon as possible, but I don’t want to specify day and date,” Thailand’s junta leader Prayut Chan-O-Cha said later.

In a heartening message to families waiting in outside the cave, footage was released by the Thai Navy Seals featuring 11 of the 12-strong team.

Each made a traditional Thai greeting gesture to the camera before introducing themselves by their nickname and saying “I’m in good health”.

Several of the boys in the frame were wearing protective foil blankets and were accompanied by a smiling diver in a wetsuit.

Also seen is the 25-year-old coach, who went with the boys down the cave after football training on June 23.

The one-minute video clip ended on a jovial note, with one of the 12 young footballers saying he was forgotten in the round of introductions, sparking laughter.

The images have delighted a Thai nation that has held its breath for a successful outcome to a challenging rescue kilometres inside one of the country’s longest caves. The grandmother (R) of Pheeraphat ‘Night’ Sompiengjai and a relative of another member of a Thai youth football team currently trapped at the Tham Luang cave, watch the latest news developments in Night’s home in Mae Sai on July 4, 2018.
Pheeraphat Sompiengjai’s family still have a birthday cake in the fridge waiting for his return home, as the discovery of the missing boy and his football team in a Thai cave brings joy to relatives but despair at the long rescue ahead. Picture: AFP Photo / Lillian Suwanrumpha.

In the video the boys, who have spent 11 nights underground, appear relaxed and much more alert than when they were when British divers found them late Monday huddled on a muddy ledge above surging underground waters.

Outside the cave the mother of one of the boys teared up as she watched the clip on a television screen, saying she was “glad” for a glimpse her son.

“He is thinner” she said as she ran her finger over his image — a sign of the heartache the saga has brought to relatives of the trapped 13.

Several Navy Seal divers have deployed along with medics vowing to stay with the group while the challenging process of evacuating the “Wild Boar” team begins. A specialist foreign diver arrives as rescue operations continue for 12 boys and their coach trapped at Tham Luang cave at Khun Nam Nang Non Forest Park in the Mae Sai district of Chiang Rai province on July 4, 2018.
A new video of a youth football team trapped in the bowels of a Thai cave emerged July 4 showing the boys laughing and saying they are well after their astonishing discovery by divers nine days after going missing. Picture: AFP Photo / Ye Aung Thu.

Thai authorities say the focus is now building up the boys’ physical and mental strength after an ordeal that has left them emaciated.

Next they have three main options: diving out of the cave system, exiting through another hole if one can be found — or drilled — or waiting out the rainy season underground.

Experts say diving out is laden with risk — more so as the boys have never dived before and some may not be able to swim.

Areas of the cave remain submerged and navigating claustrophobic passages in murky rushing waters risks panic, even if the boys have ample equipment, expert support and a crash course in how to dive.

“This requires them to be psychologically able to cope with being underwater … and the dives being not too long or difficult,” Alan Warild, an expert from the NSW Cave Rescue Squad in Australia, told AFP.

The last option of waiting for the monsoon to abate, could be protracted as the monsoon begins to bite.

However, officials say they have stored food, medicine and equipment to last for up to four months at an underground base.