Authorities in the southern state of Texas said the mass shooting, the seventh deadliest in US's modern history, appeared to be a hate crime. 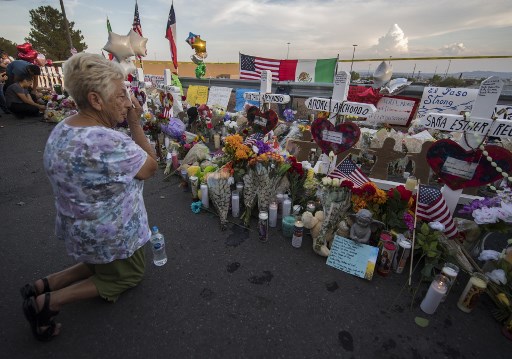 A woman prays at a makeshift memorial for victims of a shooting that left a total of 22 people dead near the Cielo Vista Mall WalMart in El Paso, Texas, on August 5, 2019. (Photo by Mark RALSTON / AFP)

Ms Reese, 85, was just buying some milk when the warning sign came.

“The boy that was working at the isle suddenly looked at me and gestured I had to go to the exit,” she said.

“The next moment, I heard shots being fired. We all ran towards the exit, from where we were led to the store next door. While I was there, I could see elderly people coming in, with blood all over them.”

Reese owns an apartment right next to a Walmart store at the Cielo Vista Mall in the US border city of El Paso, near where a shooter on Saturday killed at least 22 people, including eight Mexicans. The shooting did not take place in the mall but at an adjacent property.

Authorities in the southern state of Texas said the mass shooting, the seventh deadliest in US’s modern history, appeared to be a hate crime.

Police cited a “manifesto” attributed to the arrested suspect, a 21-year-old white male, as proof that the attack was racially motivated.

‘Shootings all the time’

On Monday morning, the Walmart parking lot next to the shopping centre was busy with people from the neighbourhood, with many bringing flowers and signs to leave on the asphalt. Nearby, an entrance to the store was blocked by police cars.

As locals comforted each other, Reese wondered how this could have happened.

“My country used to be so safe,” she said. “Now there are shootings all the time,” added Reese, who only wanted to give her last name.

For some, however, things appeared to be clear.

“A few months ago, we had white-supremacist vigilante groups coming to El Paso,” said

Fernando Garcia, the 48-year-old executive director of the Border Network for Human Rights, a group that advocates for immigration reform and human rights.

“They were fully armed and responding to the so-called invasion of immigrants here.”

In a televised address on Monday, President Donald Trump said the United States must “condemn racism, bigotry and white supremacy” and blamed the nexus of mental illness, the internet, and violence in video games and the media for the rise in mass shootings.

The Republican president, however, did not address allegations from opponents that his rhetoric against immigrants had played a part to an increase in hate crimes. Critics have cited statements in which Trump called migrants trying to enter the country through the southern border an “invasion”, as well as his racist remarks against four Democratic congresswomen of colour whom he told to “go back” to their countries of origin.

According to Garcia, Trump has directly fanned the flames of racist hatred.

When Trump came to El Paso in February for a campaign rally, Garcia took to the streets to protest. He said he would the same when the president visited again.

“Look, we didn’t expect this to happen here in El Paso,” he told Al Jazeera. “But, we knew all the factors were there. We, the immigrants and their families, have been afraid for a long time already.”

Changing the current atmosphere will take a lot of effort, Garcia said.

On Monday night, the Immanuel Baptist Church, which is located next to the shopping centre and serves many people living in the neighbourhood, will be holding a vigil for the victims of the shooting.

“I stood here as a minister many times before in El Paso,” said Ted Elmore, 71, a prayer strategist at the Southern Baptists of Texas, which is the umbrella organisation of the church.

“This is a wonderful community. We will be here in the coming days, but also in the time to come after the first crisis is over, to offer counseling and help people with grieving.”

Elmore has been involved in the response to a 2017 shooting in the first Baptist Church in the Texan city of Sutherland Springs, where a gunman killed 27 people.

“What I have seen is that there are many people who will grieve by themselves,” he said.

“Our effort is into reaching out to the community. Those that respond, will be able to heal tremendously. But, this event will always be there. They can only learn to go beyond it, live with what happened.”

Among those who also visited the shooting site was Gisella Tourk, 33. Her neighbour, 86-year-old Angie Englisbee, was one of the people who were killed by the gunman.

“She was a very sweet lady,” Tourk told Al Jazeera. “I remember during Halloween, she came out to give my children chips and cookies. She was always very nice to them.”

Tourk printed shirts with the slogan #elpasostrong on them, in an effort to raise money for Englisbee’s family.

Working in a Walmart store herself, Tourk said she was afraid to go back to work again after what had happened. Buying a handgun to be able to protect herself was now in her mind, she added.

“Is there a person that feels superior to me because of the colour of their skin?” she asked, before saying that she had decided against attending a concert in Arizona.

“I don’t want to be in a space full of people any more. You always hear about this on the news, but I could never imagine this could happen to us.”

Meanwhile, Michael Romo, a 58-year-old teacher who has worked for 30 years in El Paso and lives close to the Cielo Vista Mall, said he believed social alienation was an important aspect of the problem.

“What I see in the classroom, is young man who disappear in their phones, where they see violence and play violent games,” Romo said.

“You can see them getting into trouble. The problem is that teachers don’t really know what to do. They aren’t psychiatrists.”