Largest strike in decades gets under way in France

Protesters will march from the capital's Gare du Nord to Place de la Nation in the afternoon. 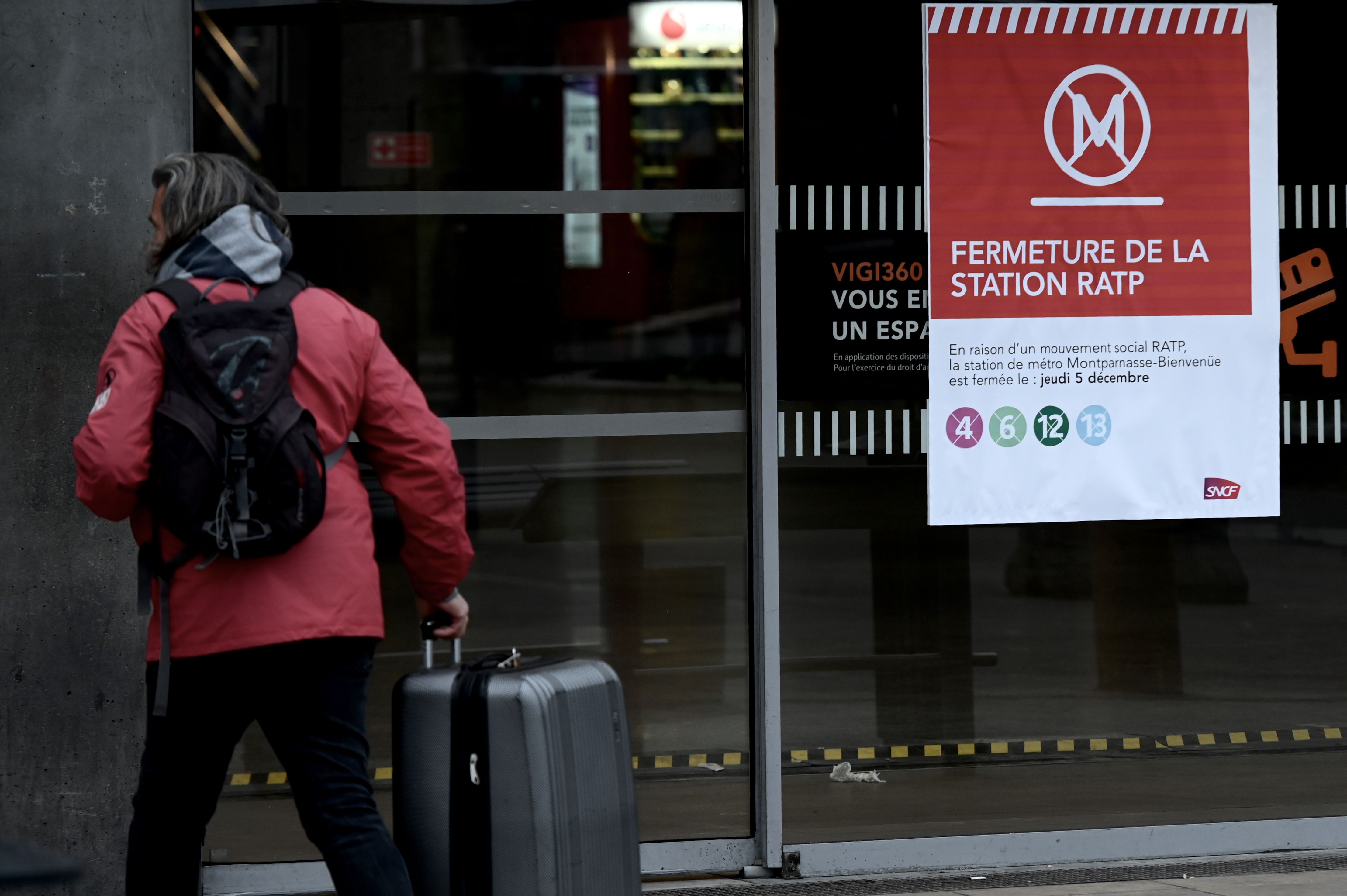 A man walks past a sign reading "metro lines closed" at Montparnasse railway station in Paris on December 5, 2019 during a strike of Paris public transports. / AFP / Philippe LOPEZ

France’s public transport networks ground to a near halt on Thursday as unions dug in for a nationwide strike aimed at forcing President Emmanuel Macron to abandon plans to overhaul the country’s Byzantine pension system.

Railway and metro stations in Paris were largely deserted during the early rush hour as commuters dusted off old bicycles, turned to carpooling rides or worked from home.

The Eiffel Tower also warned visitors to stay away as Paris deployed 6,000 police for what’s expected to be a major demonstration through the capital.

Workers argue that the reform will make them work longer for smaller pensions.

Before sunrise, riot police deployed along the boutique-lined Champs Elysees boulevard, searching the bags of pedestrians ahead of a day of street protests which the government has warned may be infiltrated by violent groups.

“Public transport will be very difficult today, as it will tomorrow and probably this weekend too,” junior transport minister Jean-Baptiste Djebbari told RTL radio.

The countrywide walkout by public workers is one of the biggest strikes in decades.

The SNCF state railway says only one in 10 commuter and high-speed TGV trains will run. Train operators Eurostar and Thalys have cancelled at least half their services linking Paris with London and Brussels. The civil aviation authority asked airlines to cancel around 20% of flights because of knock-on effects from the strike.

More than half of all primary and secondary teachers are expected to walk out and hospital emergency rooms nationwide will operate on thin staffing. Transport unions have set no end-date for the strike.

“What we’ve got to do is shut the economy down,” Christian Grolier, a senior official from the Force Ouvriere union, told Reuters news agency. “People are spoiling for a fight.”

Protesters will march from the capital’s Gare du Nord to Place de la Nation in the afternoon.

Macron said he wanted to simplify France’s pension system, which comprised more than 40 different plans, many with different retirement ages and benefits, claiming the system was unfair and too costly.

He wants a single points-based system under which for each euro contributed, every pensioner has equal rights.

Twenty-four years later, the looming standoff is a risky venture for France’s hard-left unions who have seen membership and public support wane in recent years.

They are battling to remain relevant against a president who has faced down waves of strikes over reforms of the labour market and SNCF railways.

For Macron, the showdown will set the tone for the second half of his mandate, with more difficult reforms to come, including to unemployment benefits.

The strikes follow months of sometimes violent “yellow vest” over the high cost of living and the perceived elitism of political class.

Laurent Berger, head of the reform-minded CFDT union, said the social environment was more explosive than in 1995.