Chinese Ambassador to SA Lin Songtian says the US and some Western countries are pushing China to take drastic action against Hong Kong protesters so they can have a pretext to implement sanctions against Beijing. A policeman (C) tells the media to move from the area as they detain protesters during clashes in the Wanchai district in Hong Kong on October 6, 2019. - A Hong Kong judge on October 6 rejected a challenge to an emergency law criminalising protesters wearing face masks as democracy activists hit the streets again in defiance of the ban despite half the city's subway stations remaining closed. (Photo by Mohd RASFAN / AFP)

He said on Thursday that these countries have supposedly incited and supported radicals to keep escalating the violence in the former British colony, which reverted to mainland Chinese rule in 1997.

Under Beijing, Hong Kong has since been governed in terms of the One Country, Two Systems model.

Lin said the West has allegedly encouraged these radicals to blatantly defy the Hong Kong SAR government and the central government and to challenge the principle of One Country, Two Systems. 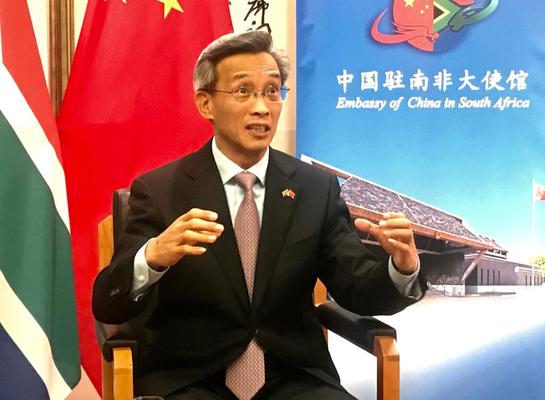 “Their evil intention is to force the central government of China to take strong measures against the violence in Hong Kong so that they can fabricate excuses for sanctions and to contain China in an all-round way. Those are the dirty tricks they always play. Their evil intentions are there for all to see,” Lin said.

The diplomat highlighted many instances of how the United States had been trying to destabilise China and how its senior government officials had been encouraging extremists to rise up against the country.

At a media briefing at the Chinese Embassy in Pretoria, a video was shown of the six-month-old violence, where protestors were shown fighting street battles against the police, their opponents or those who supported Beijing; there was the invasion of the Hong Kong Legislative Council and government buildings, with various instances of petrol bombings against police and innocent bystanders.

It also showed previous instances of terrorism against China, particularly in Xinjiang, and how some sections of the Western media had glorified the riots in Hong Kong as “peaceful demonstrations” and “democratic protests”.

At the same time it depicted the voices of independent US journalists who condemned what was happening as not democratic but mere acts of vandalism and violence being masterminded at senior level by the United States government.

Since the outbreak of the protests, US President Donald Trump, his vice president, the house speaker and other US political dignitaries had met with key figures involved in the Hong Kong disruptions and offered them scholarships to study in top US universities.

Lin mentioned a number of non-government organisations and foundations that had provided funding, logistics and training support to anti-China rioters in Hong Kong.

“The violent criminals in Hong Kong, putting on masks and disguises and holding the national flags of the US and UK, have kept escalating the violence,” Lin said.

He said the Chinese government believed the Hong Kong government and Hong Kong people had the wisdom and ability to address the current chaos.

China, as President Xi Jinping stated recently, would continue to support the chief executive of Hong Kong in leading and governing the autonomous province according to law. They also supported the Hong Kong police’s strict enforcement of the law and the judiciary in punishing violent criminals.

“The Chinese government is unwavering in its resolve to safeguard national sovereignty, security and development interests, to continue to stick to the principle of One Country, Two Systems and to oppose foreign interference in Hong Kong affairs,” Lin said.

He said the violence needed to end to restore social stability and the rule of law as soon as possible.

This would involve the police taking effective, lawful measures to curb and crack down on all illegal and violent terrorist acts and for Hong Kong’s people to wake up and see through the “evil intentions” of the US and other Western countries and to loudly say no to the violence and terrorism, Western colonialism and “brutal interventions of the US”.

Asked by a Voice of America journalist why he had decided to talk about this matter in South Africa and not in Washington, Lin said it was his duty as an ambassador to tell the world the truth of what was going on in Hong Kong.

Speaking generally, Lin said there was religious tolerance in China and all religions were free in the country. The country had Buddhism, Christianity, Islam and other religions.

“All religions in the world are found in China. In China people are free to believe. We say you are welcome to have your different beliefs but must live in harmony,” Lin said.

The ambassador also revealed that, by the end of next year, all people in China would be out of poverty.