On May 9 and 10, Melzer and his medical team visited Assange in prison and concluded that he showed signs of psychological torture. 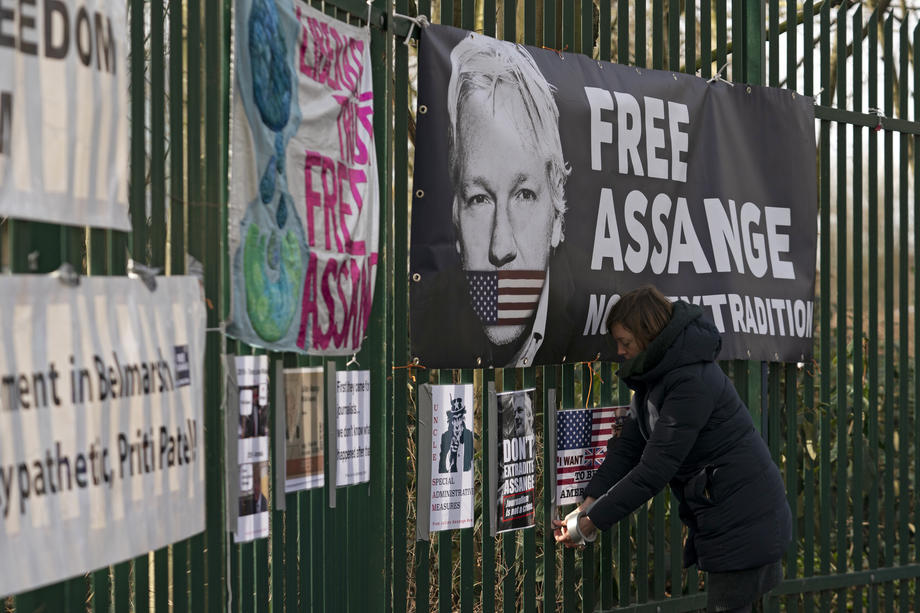 Supporters of Wikileaks founder Julian Assange protest outside Woolwich Crown Court in London, Britain, 25 February 2020. Assange is facing extradition to the US on 18 charges and faces up to 175 years in prison if found guilty. Picture: EPA-EFE / WILL OLIVER

The extradition case of Wikileaks founder Julian Assange has cast the spotlight not only on his future treatment should he be extradited to the United States, but on the treatment he has received during the close to ten years since he was first arrested in 2010, say legal experts.

The prospect of psychological torture, should Assange be extradited to the US and tried for treason, could render the extradition illegal under international law.

Assange is wanted in the United States under the 1917 Espionage Act. The criminal charges against him include conspiring to hack government computers and violating espionage law. If convicted he could spend many decades in prison.

He is accused of conspiring with former US army intelligence analyst Chelsea Manning to obtain and disclose information “with reason to believe that [it] was to be used to the injury of the United States or the advantage of a foreign nation”, according to a Department of Justice (DoJ) press release.

The UN special rapporteur on torture and inhuman treatment, Nils Melzer, released an advance copy of his report on psychological torture on Monday. It was prepared pursuant to a resolution agreed by the UN Human Rights Council .

In his report, Melzer, who holds the Swiss Human Rights chair at the Geneva Academy, argues that Assange is a victim of psychological torture. Although his report primarily analyses conceptual questions on torture, Melzer also highlights the plight of Assange as well as the persecution and torture of the Uighur in Xinjiang, China.

In Melzer’s view, the Assange case shows the perception that “mature democracies” such as the United Kingdom and United States do not engage in psychological torture is false.

John Shipmore, Assange’s father, told Al Jazeera: “The only international law which has been observed in this case is the extradition treaty between the US and the UK. All the rest has been abrogated.”

On May 9 and 10, Melzer and his medical team visited Assange in London’s Belmarsh prison to assess Assange’s physical and psychological health, the conditions of his detention, as well as the alleged risks of tortue or ill-treatment Assange could be exposed to should he be extradited to the US.

The medical team followed the Istanbul Protocol , a set of international guidelines for documenting torture, and concluded that Assange showed signs of psychological torture.

According to Lutz Oette, director of the centre for human rights at the School of Oriental and African Studies in London, “the hallmark of psychological torture is that it refers to torture methods aimed at the mind, leaving no visible traces”.

Oette adds: “The laws of many countries only criminalise physical torture.”

Oette says psychological torture is increasingly documented worldwide, including in the Middle East: “In our work on torture in the Middle East a few years ago, we received numerous accounts and reports about mock executions, threats, particularly rape and other sexual violence and insults. Of particular concern is the enforced disappearances which in itself amounts to psychological torture.”

Melzer and Oette agree that even though psychological torture is seen as less serious than physical torture, there is no hierarchy between the two. According to Oette, one reason for this is that torture that leaves no physical traces can more easily be denied.

Since his near seven-year period of asylum in the Ecuadorian embassy in London ended last April, Assange has spent more than nine months in the top-security Belmarsh prison. In May, Melzer said “it is obvious that Mr Assange’s health has been seriously affected by the extremely hostile and arbitrary environment he has been exposed to for many years”.

In November 2019 a group of more than 60 doctors wrote an open letter , stating they feared Assange’s health was so bad he could die inside the prison. They based their assessment on “harrowing eyewitness accounts” of his October 21 court appearance in London. Assange, they said, seemed frail and confused when he was asked to speak at Westminster Magistrate’s Court in London. He even had difficulties remembering his date of birth.

His prosecution in the US could have grave consequences for journalists and whistleblowers more generally, with activists saying it will narrow the rights of reporting in the public interest. According to Srecko Horvat, a Croatian philosopher, Assange will “almost certainly be found guilty” should he stand trial in the US and end up in a “Guantanamo -like prison”.

According to Mark Drumbl, professor of international law at Washington and Lee University in the US, the Soering case of the European Court of Human Rights (ECHR) showed that being extradited only to spend many years awaiting a death penalty could violate international law.

According to Oette “the ECHR has made it clear that states should not extradite a person who faces the death penalty, death row or a trial where evidence obtained under torture is used”.

He added: “The Rwanda tribunal took this a step further by finding that life imprisonment without parole, even in the case of an accused perpetrator of genocide, would also devastate the spirit of a human being.

“A strong argument can be made that the prospect of extradition to a country that is likely to subject an accused to solitary confinement and imprisonment in the conditions of a maximum security prison breaches the prohibition not to expose anyone to the risk of torture.”