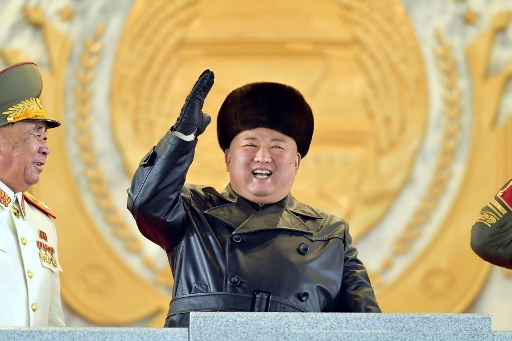 This picture taken on January 14, 2021 and released from North Korea's official Korean Central News Agency (KCNA) on January 15 shows North Korean leader Kim Jong Un gesturing from the tribune during a military parade celebrating the 8th Congress of the Workers' Party of Korea (WPK) in Pyongyang. (Photo by - / KCNA VIA KNS / AFP)

The number of North Koreans defecting to the South plummeted last year after Pyongyang closed its border in the face of the coronavirus pandemic, Seoul’s unification ministry said Wednesday.

The vast majority of Northern defectors first travel to neighbouring China, sometimes staying there for years before making their way on to the South via third countries, and only a handful directly cross the Demilitarised Zone that divides the peninsula.

But the North has a ramshackle health system that would struggle to cope with a major disease outbreak and imposed a strict border closure last January to try to protect itself from the virus that first emerged in China, its key ally.

The North has not confirmed a single case of Covid-19 — although experts have long said it is unlikely to have escaped the pandemic — and in September the commander of US forces in the South said Pyongyang had issued shoot-to-kill orders in its border areas to prevent the virus entering the country.

“It looks like the number of (North Korean) people entering the South decreased due to the effects of North Korean-Chinese border control and restrictions of movement from third countries due to Covid-19,” Seoul’s unification ministry said in a statement.

Inter-Korean relations have been in a deep freeze following the collapse of a summit in Hanoi between Kim Jong Un and Donald Trump in 2019 over what the nuclear-armed North would be willing to give up in exchange for a loosening of sanctions.