The pope has insisted on the visit despite resurging violence. 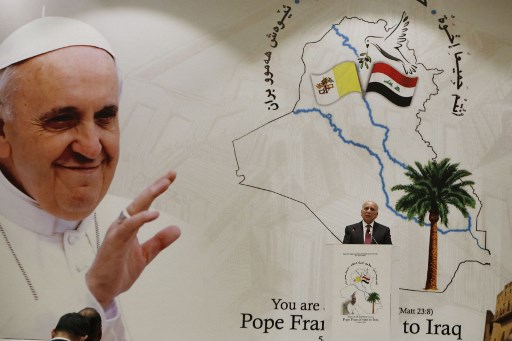 Iraqi Foreign Minister Fuad Hussein holds a press conference at the Babylon Hotel in the capital Baghdad, on March 4, 2021, on the eve of the first papal visit to Iraq. - Pope Francis begins a historic 4-day trip to war-scarred Iraq on March 5, defying security concerns and the coronavirus pandemic. (Photo by Sabah ARAR / AFP) / The erroneous mention[s] appearing in the metadata of this photo by Sabah ARAR has been modified in AFP systems in the following manner: [March 4] instead of [February 4]. Please immediately remove the erroneous mention[s] from all your online services and delete it (them) from your servers. If you have been authorized by AFP to distribute it (them) to third parties, please ensure that the same actions are carried out by them. Failure to promptly comply with these instructions will entail liability on your part for any continued or post notification usage. Therefore we thank you very much for all your attention and prompt action. We are sorry for the inconvenience this notification may cause and remain at your disposal for any further information you may require.

Pope Francis began a historic trip to war-battered Iraq on Friday, defying security fears and the pandemic to comfort one of the world’s oldest and most persecuted Christian communities.

The 84-year-old, who said he was making the first-ever papal visit to Iraq as a “pilgrim of peace,” will also reach out to Shiite Muslims when he meets Iraq’s top cleric, Grand Ayatollah Ali Sistani.

The pope left Rome early Friday for the four-day journey, his first abroad since the onset of the Covid-19 pandemic, which left the leader of the world’s 1.3 billion Catholics saying he felt “caged” inside the Vatican.

While Francis has been vaccinated, Iraq has been gripped by a second wave with a record of over 5,000 new cases a day, prompting authorities to impose full lockdowns during the pontiff’s visit.

Security will be tight in Iraq, which has endured years of war and insurgency, is still hunting for Islamic State sleeper cells, and days ago saw a barrage of rockets plough into a military base.

Francis will preside over a half-dozen services in ravaged churches, refurbished stadiums and remote desert locations, where attendance will be limited to allow for social distancing.

Inside the country, he will travel more than 1,400 kilometres (870 miles) by plane and helicopter, flying over areas where security forces are still battling IS remnants.

For shorter trips, Francis will take an armoured car on freshly paved roads that will be lined with flowers and posters welcoming the leader known here as “Baba Al-Vatican”.

The pope’s visit has deeply touched Iraq’s Christians, whose numbers have collapsed over years of persecution and sectarian violence, from 1.5 million in 2003 to fewer than 400,000 today.

“We’re hoping the pope will explain to the government that it needs to help its people,” a Christian from Iraq’s north, Saad al-Rassam, told AFP. “We have suffered so much, we need the support.”

The first day of the pope’s ambitious itinerary will see him meet government officials and clerics in the capital Baghdad, including at the Our Lady of Salvation church, where a jihadist attack left dozens dead in 2010.

He will also visit the northern province of Nineveh, where in 2014 IS jihadists forced minorities to either flee, convert to Islam or be put to death.

“People had only a few minutes to decide if they wanted to leave or be decapitated,” recalled Karam Qacha, a Chaldean Catholic priest in Nineveh.

“We left everything — except our faith.”

Some 100,000 Christians — around half of those who lived in the province — fled, of whom just 36,000 have returned, according to Catholic charity “Aid to the Church in Need”.

Among the returnees, a third have said they want to leave again in coming years, dismayed by Iraq’s rampant corruption, persecution and poverty, which now affects 40 percent of the population.

The exodus is a loss for all of Iraq, said Cardinal Leonardo Sandri, who heads the Vatican’s Congregation for the Oriental Churches and will accompany the pope to Iraq.

“A Middle East without Christians is like trying to make bread with flour, but no yeast or salt,” he said.

The visit aims not only to encourage Christians to stay in their homeland, but even prompt some emigres to return from nearby Lebanon and Jordan, or further afield like Canada and Australia.

In a video address ahead of the trip, Francis evoked “the wounds of loved ones left behind and homes abandoned,” saying there had been “too many martyrs” in Iraq.

“I come as a pilgrim, a penitent pilgrim to implore forgiveness and reconciliation from the Lord after years of war and terrorism.”

The pope has insisted on the visit despite resurging violence.

Rocket attacks across the country have left three people dead in recent weeks, including a US contractor who died Wednesday.

Francis’ determination to travel to areas long shunned by foreign dignitaries has impressed many in Iraq — as has his planned meeting with Sistani, 90, the top authority for Iraq’s Shiites.

A highly reclusive figure who rarely accepts visitors, Sistani will make an exception to host Francis at his humble home in the shrine city of Najaf on Saturday.

Banners all over Najaf have celebrated “the historic encounter, between the minarets and the church bells”.

Francis, a major supporter of inter-religious dialogue, will afterwards head to the desert site of Ur, where Abraham is thought to have been born.

There, he will host an interfaith service that will bring together not only the Abrahamic religions but also include followers of other beliefs, including Yazidis and Sabeans. 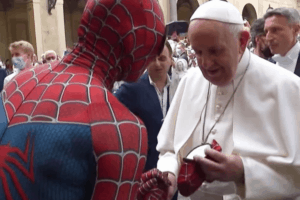 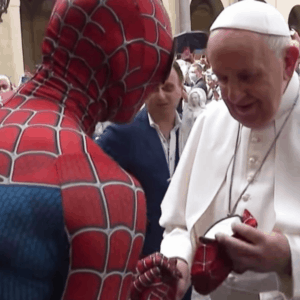