WATCH: ‘Eye of fire’ swirls in Gulf of Mexico after underwater gas leak

The company confirmed that no injuries or evacuations were reported, and that the fire had since been extinguished. 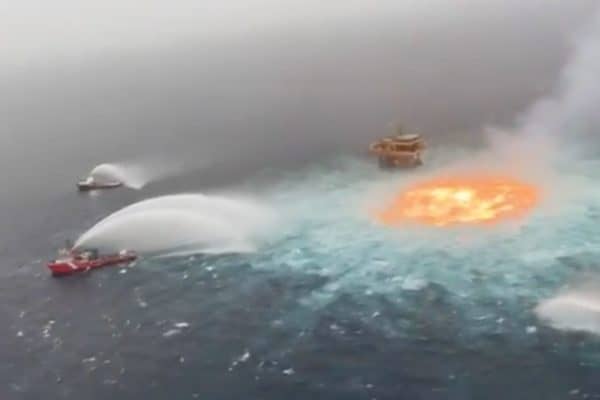 Dramatic footage of the ocean blaze was widely shared on social media on Saturday, with ironic images of ships blasting fires with water in the middle of the sea. Photo: Twitter screenshot/@APompliano

Part of the Atlantic in the Campeche Bank of the Gulf of Mexico was on fire for at least five hours on Friday, following a gas leak from an underwater pipeline.

Dramatic footage of the ocean blaze, dubbed the “eye of fire”, was widely shared on social media, with ironic images of ships blasting fires with water in the middle of the sea.

The Gulf of Mexico is literally on fire because a pipeline ruptured pic.twitter.com/J4ur5MNyt1

Reuters reported that workers used nitrogen to control the fire, which burnt west of the Yucatan peninsula.

The company responsible for the fire is Mexico’s state oil company Pemex, who confirmed the incident in a statement issued late on Friday night.

The ocean is on fire in the Gulf of Mexico and now boats are pulling up to use water to put it out.

The company said the gas leak took place in the 12-inch submarine pipeline, causing a fire 150 metres from the KU-C satellite platform in the Campeche Sonda.

The Campeche region makes most of its money through oil leached from shores in the shallow waters of the Sonda de Campeche.

Despite the discovery of oil in the 1970s prompting economic recovery for the region, it also brought with it a plethora of environmental problems, notably the decrease in fishing yields due to the oil unsustainable practice.

Pemex said the leak and subsequent fire was “dealt with immediately”, with strict security protocols in closing pipeline valves and firefighting vessels resulting in operations being restored five hours and fifteen minutes later.

The company confirmed that no injuries or evacuations were reported.

The same cannot however be said for the environmental destruction, which has not yet been tallied.

Pemex said investigations into the cause of the incident will be carried out.

Rating agencies Fitch and Moody’s downgraded the Pemex’s credit rating to junk status in April due to its vulnerability in the face of low oil prices and its need for greater government support, AFP reported.

Pemex said its total debt rose four percent in the first quarter from a year earlier, to $113.9 billion.

The company said in April it was battling back from what it has called the worst crisis in its history last year due to the Covid-19 pandemic.