Macron hopes to encourage all French to be vaccinated against Covid-19 and its fast-spreading Delta variant. 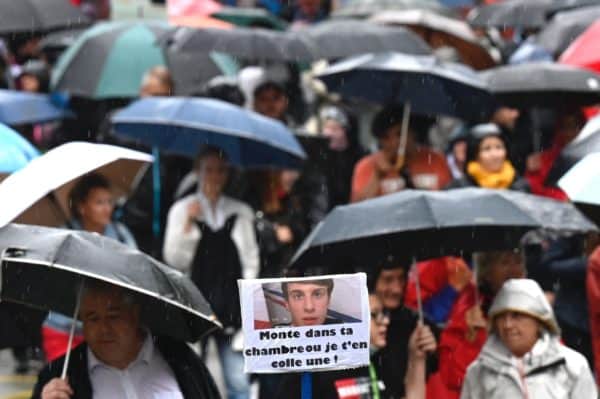 A woman holds a sign with the French President Emmanuel Macron's face, reading 'Go up to your room or I'll slap you', on a national day of protest against French legislation. Photo: AFP/SEBASTIEN BOZON

Almost a quarter of a million people took to the streets across France on Saturday for the biggest protests yet against a coronavirus health pass needed to enter a cafe or travel on an inter-city train, two days before the new rules come into force.

Similar but smaller protests were held in Italy.

Championed by President Emmanuel Macron, the French regulations make it obligatory to have either a full course of vaccination against Covid-19, a negative test or be recently recovered from the virus to enjoy routine activities.

Macron, who faces re-election next year, hopes to encourage all French to be vaccinated against Covid-19 and thereby defeat the virus and its fast-spreading Delta variant.

But opponents – who have now held four weekends of consecutive protests – argue the rules encroach on civil liberties in a country where individual freedom is highly prized.

About 237,000 people turned out across France, including 17,000 in Paris, the interior ministry said, exceeding the 204,000 recorded last weekend –  unusual numbers for protests at the height of the summer break.

In one of several protests in Paris, hundreds marched from the western suburbs to the centre, chanting “Freedom!” and “Macron, we don’t want your pass!”.

Wearing a mask, Alexandre Fourez, 34, said he was protesting for the first time and that he had himself recovered from Covid.

“The problem with the health pass is that our hand is being forced,” said the marketing employee, adding he “really has difficulty believing its use will be temporary”.

At least 37,000 people protested in the Provence-Alpes-Cote d’Azur region on the Mediterranean coast in cities including Toulon, Nice and Marseille, officials said. Slogans included: “The health pass means the death of freedoms.”

From Monday, the health pass will be needed to eat in a restaurant or enjoy a drink at a cafe – both indoors and on a terrace. It will be obligatory on inter-city transport including high-speed trains and domestic flights although will not be needed on metro systems and suburban transport.

The pass has already been required since July 21 to visit cultural venues such as cinemas, theatres and museums. Its extension was approved by France’s Constitutional Council on Thursday.

Most of the protests were peaceful but there were seven arrests in the southeastern city of Lyon for throwing projectiles while in Dijon a tram line was blocked. There were 35 arrests nationwide, the interior ministry said, adding seven members of the security forces were lightly wounded.

French government spokesman Gabriel Attal said the pass, which under current rules will be required until November 15, was needed to avoid further restrictions amid a fourth wave of the Covid-19 epidemic.

Macron, who is at his official holiday residence in the south of France, has repeatedly taken to the social media platform Tik Tok, popular among young people, to get his message across.

“It’s a question of being a good citizen… our freedom is worth nothing if we infect our friends, neighbours or grandparents. To be free is to be responsible.”

The Le Monde daily said Macron’s decision to show no patience with the protesters carried risks, even for a leader who appears to thrive on confrontation as during the 2018-2019 “yellow vest” protests.

“It is a perilous strategy. Playing with the street is to play with fire,” it said.

Protests were held in a number of Italian cities on Saturday against the introduction of new measures there requiring proof of coronavirus status to attend indoor events and for teachers.

The Green Pass, an extension of the EU’s digital Covid certificate, became compulsory in Italy on Friday to enter cinemas, museums and indoor sports venues or to eat indoors at restaurants.

School and university staff will need the pass, as will university students, while from September 1 it will be required on domestic flights and long-distance trains.

The vaccine rollout has gathered steam in France since the health pass plan was announced and the government wants 50 million people to have received at least one jab by the end of August. Some 55 percent of the population is now double jabbed. 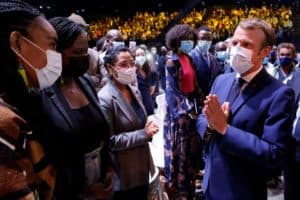 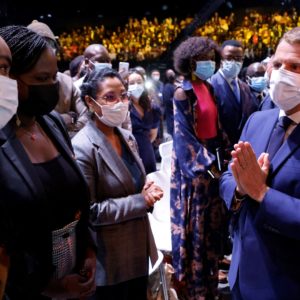