The city of around 200,000 people identified the company responsible for the leak as Beta Offshore, a California subsidiary of Houston-based Amplify Energy Corp. 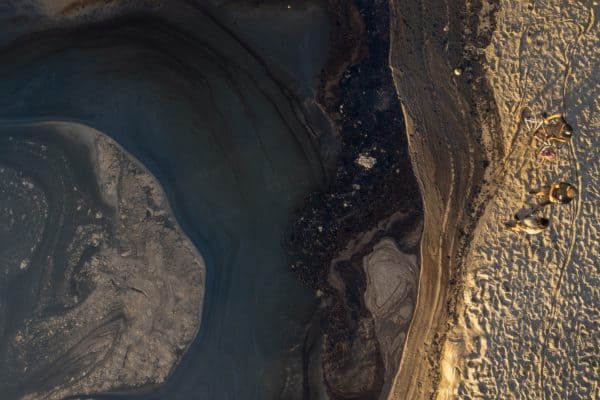 This aerial picture taken on October 3, 2021 shows people overlooking oil against a berm of sand to keep it from flowing from the ocean into the Santa Ana River as an oil spill from an offshore oil rig reaches the shore and sensitive wildlife habitats in Newport Beach, California. - Authorities in California's beachfront Orange County cities scrambled October 3, 2021 to mitigate the fallout from a major oil spill off the coast that caused "substantial ecological impacts." As of Sunday, the oil plume from the 126,000-gallon (480,000 liters) spill of post-production crude was an estimated 5.8 nautical miles (6.7 miles, 10 kilometers) long and stretched along the popular shorelines of Huntington Beach and Newport Beach, Huntington Beach city authorities said in a statement. (Photo by DAVID MCNEW / AFP)

California authorities and emergency responders were racing Monday to contain the damage from a major offshore oil spill that the city of Huntington Beach described as an “environmental catastrophe.”

Popular beaches along a 15-mile (24-kilometer) stretch of coastline south of Los Angeles were closed from Huntington Beach to Laguna Beach, city officials reported as crews scrambled to clean up one of California’s biggest spills in decades.

Fishing operations in the area were ordered halted, and wildlife has been killed due to the 126,000-gallon (480,000-liter) spill of post-production crude that began leaking early Saturday from what officials said is a pipeline connected to an oil rig offshore.

The US Coast Guard coordinating the response said early Monday that oil amounting to less than three percent of the spill plume — estimated to be 5.8 nautical miles (6.7 miles, 10 kilometers) long — had been recovered, and that more than a mile of oil containment booms had been deployed.

“Unfortunately, we are starting to see oil covered fish and birds washing up along our coastline,” including in protected wetlands, the City of Huntington Beach said in a statement Sunday.

The city of around 200,000 people identified the company responsible for the leak as Beta Offshore, a California subsidiary of Houston-based Amplify Energy Corp.

“We will be working to ensure that Amplify Energy Corporation does everything possible to rectify this environmental catastrophe,” Huntington Beach said.

Amplify Energy said in a statement Monday that “as a precautionary measure, all of the company’s production and pipeline operations at the Beta Field have been shut down.”

The spill prompted US Senator Alex Padilla of California to renew his call for an end to offshore oil drilling.

“We’ve seen time and time again how damaging offshore oil spills are to our coastal ecosystems as well as to our economy,” he tweeted. “We have the power to prevent future spills.”

At a press conference Sunday afternoon, officials warned residents not to touch or try to save any wildlife themselves, but to instead call local authorities to alert them to animals affected by the oil.

“This is just devastating for our marine life, our habitat, our economics, our entire community,” Orange County Supervisor Katrina Foley said Sunday on MSNBC.

“Our natural habitat we’ve spent decades building up and creating is just damaged in a day.”

Foley said she had learned that responders had capped the pipeline and were working to repair it, but that as of Sunday some oil was still leaking.

The spill originated near the Elly platform, which was built in 1980 and is one of 23 oil and gas drilling platforms in federal waters off California, the Los Angeles Times reported.

Orange County officials warned that the affected beaches could be closed for weeks or months.

“This is why the US needs to end coastal oil drilling,” the Times wrote in an editorial.