The EU said mobile payments play a 'rapidly growing part' in the digital economy, but Apple robbed consumers of the right to access competitive payment options. 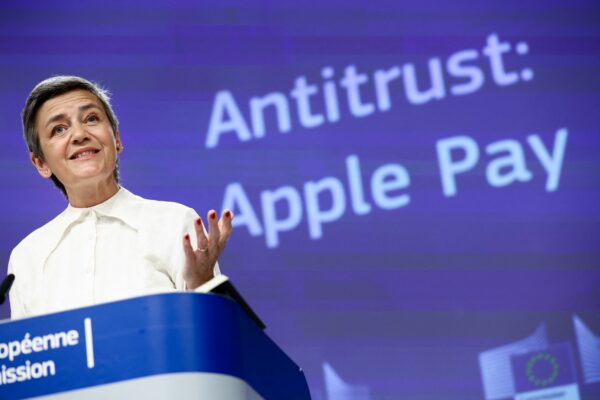 EU vice-president Margrethe Vestager during a press conference on 2 May 2022 on objections regarding Apple Pay. Photo: AFP/Kenzo Tribouillard

Big Tech is at it again. The European Union (EU) accused Apple on Monday of blocking rivals from its popular ‘tap-as-you-go’ iPhone payment system.

The EU said in a statement: “We have informed Apple of our preliminary view that it abused its dominant position in markets for mobile wallets on iOS devices.”

Vestager said since mobile payments play such a vital role in the digital economy, it’s imperative to for consumers to benefit from “a competitive and innovative payments landscape”.

Apple, however, robbed consumers (and other competitors) of that right by “restricting third-party access to key technology necessary to develop rival mobile wallet solutions”.

ALSO READ: WWDC22 to kick off on 6 June as online event

The EU’s latest statement only takes issues with the access to NFC (near-field-communication) restricting third-party developers and not with Apple’s online restrictions to add specific products to its App Store.

That is a separate case requiring an “in-depth investigation in Apple’s practices” pertaining to issues raised by the EU back in June 2020.

The case against the Big Five

The latest spate of Big Tech Antitrust investigations has been ongoing since 2019, when the US government turned the spotlight on some of its most prominent tech companies.

After a spate of unusual negotiations, the Justice Department has agreed to handle potential antitrust investigations related to Apple and Google, while the Federal Trade Commission will take on Facebook and Amazon.

However, the first major antitrust law case began in 2001 when Microsoft was accused of maintaining its monopoly position in the PC market through “illegal means”.

Microsoft did this primarily through the legal and technical restrictions to prevent other manufacturers of uninstalling Internet Explorer in favour of other programmes.