The Nigerian government said it hoped to vaccinate at least 70 percent of its adult population over the next two years. 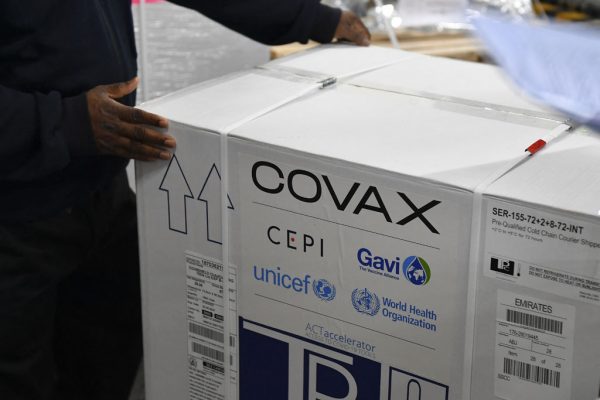 A carton box of a Covishield vaccine developed by Pune based Serum Institute of India (SII) is unloaded at the Mumbai airport on February 24, 2021, as part of the Covax scheme, which aims to procure and distribute inoculations fairly among all nations. (Photo by INDRANIL MUKHERJEE / AFP)

The shipment aboard an Emirates flight arrived shortly before noon at Nnamdi Azikiwe International Airport in the capital Abuja, an AFP journalist said. It contained 3.94 million Oxford/AstraZenica doses, the UN and Nigeria’s health agency added.

Richer countries have surged ahead with vaccinations, but many poorer countries are still awaiting deliveries, prompting the World Health Organization (WHO) to warn that the crisis cannot end unless everyone can inoculate their populations.

The Oxford/AstraZeneca vaccines, manufactured by the Serum Institute of India, that arrived in Nigeria are the first of 16 million doses that Covax plans to deliver over the coming months to the country of 200 million people.

“Today is a good day for Nigeria,” Faisal Shuaib, director of the primary healthcare agency, said in a statement.

“Our team is ready to start administering doses to frontline health workers.”

Vaccinations are scheduled to start Friday with frontline workers and support staff followed by the president and vice president on Saturday, a government spokesman Garba Shehu told AFP.

The Nigerian government said it hoped to vaccinate at least 70 percent of its adult population over the next two years.

“As the vaccines arrive in batches due to limited supply we will inform Nigerians about who and where to receive the vaccine,” Shuaib told reporters Monday.

The agency launched a self-registration portal online to try and help ease the roll-out but the country faces immense challenges due to security and logistics.

“States without a functional airport will have their vaccines transported by road using vans with fitted cold cabins, from the nearest airport,” Shuaib said.

The West African country has recorded 156,017 cases and 1,915 deaths since the start of the pandemic, though the figures are considered undercounted given the low number of tests administered.

A new virus variant has also been discovered in Nigeria, but researchers have not yet determined if it is more contagious or deadly than the original strain.

Last week, Ghana and Ivory Coast were the first countries to receive vaccines from Covax, an initiative led by Gavi the Vaccine Alliance, WHO and the Coalition for Epidemic Preparedness Innovations (CEPI) with UNICEF as implementing partner.