While Zanu-PF is undoubtedly loathsome, it is not for the world to dictate to Zimbabweans which swamp creature they should vote for. 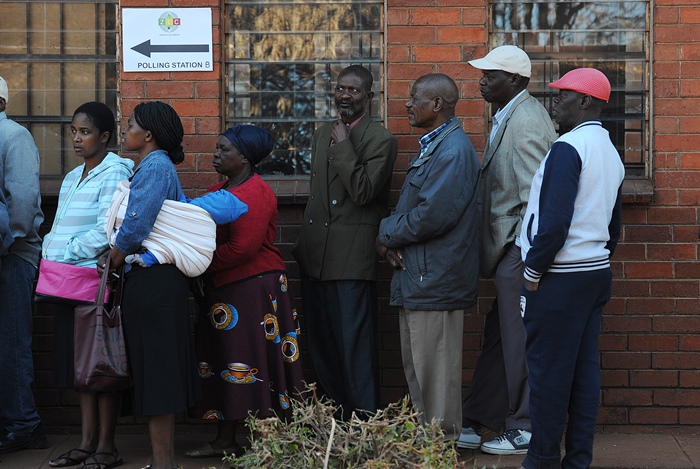 The community of Kuwadzana 2 primary in Harare stand in a queue to cast their votes in the Zimbabwe presidential election, 30 July 2018. Picture: Matthews Baloyi/AFrican News Agency (ANA)

Zimbabwe’s Zanu-PF government must have been more than a little worried. It was risking it all on a roll of the dice: the unfettered will of the electorate.

For the first time in 16 years, there were election observers from the EU, the US, and the Commonwealth, instead of only from the dependably one-eyed observers sent by SADC and the AU.

This was a high-stakes gamble by Emmerson Mnangagwa. Effectively, for the first time in almost two decades, the results would not be printed before the ballot papers.

As it happens, it was not even close. Zanu-PF trounced the main contender, the MDC Alliance, led by Nelson Chamisa.

The polls had barely closed before Chamisa proclaimed that MDC figures showed it had “resoundingly” won the election and all that was left was for the Zimbabwe Electoral Commission to announce his victory. Any delay or result to the contrary, would be proof that Zanu-PF had stolen the election.

It was a clever, manipulative ploy; the kind that South Africa’s populist puppeteer, EFF leader Julius Malema, would doubtlessly admire. It was also a cynically incendiary action in a country where political violence is always bubbling.

When the ZEC delayed announcing the presidential result to allow the trickle-release of parliamentary seats, the firing circuit was completed. Furious MDC supporters took to the streets and some stoned the security forces, which opened fire and killed at least six.

It’s an unhappy reversion to entrenched antipathies that Zimbabwe, which is trying to rejoin the democratic world, cannot afford. And while Zanu-PF is undoubtedly loathsome, it is not for the world to dictate to Zimbabweans which swamp creature they should vote for.

While I am sceptical that Zanu-PF would have surrendered power if it had lost, there is no reason, yet, to believe they did not win fairly.

The MDC has provided no evidence of the enormous scale of rigging necessary to reverse its self-proclaimed “exceedingly good” majority into a miserable 53 seats in a 210-seat chamber. It is difficult to believe, also, that such massive fraud would escape the notice of literally thousands of officials who oversaw the process.

Although they had concerns over state media bias and a counting process that needed improvement, the African observer groups concluded that the election was largely in line with the law. The EU observer mission’s assessment, too, was that despite the “unlevel playing field”, the election appeared substantively fair.

The EU did, however, leave the door open to a revision of opinion. The head of the EU observer mission said he did not yet know whether the shortcomings would have a material effect on the outcome of the vote.

That’s one of those cryptic equivocations that one must expect from a cover-your-arse career politician. It presumably means that unless the MDC gets the results overturned in the courts, or EU self-interests dictate otherwise, the result will be accepted but ring-fenced with caveats.

These caveats will presumably include Zanu-PF having to show some commitment to democracy and the rule of law, going into the future.

That is exactly how it should be: some carrot, some stick.