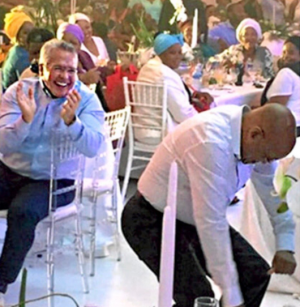 The presidential proclamation, issued exactly a year ago, made clear the ambitious intentions. A full judicial Commission of Inquiry into State Capture, headed by the deputy chief justice of the republic.

The first weeks dealt mainly with the machinations of the Gupta clan cronies of our recalled former president, Jacob Zuma.

The evidence was of a brazenly audacious strategy. A tight, politically connected cabal attempted to capture control of every important public sector entity, as well as to subvert the constitutionally laid down processes of executive government, all to serve the pecuniary benefit of the conspirators.

If this is the gist of the commission’s eventual findings, we should not underestimate the scale of the potential disaster that South Africa has narrowly averted – averted only because of the indefatigable efforts of a small band of journalists and the courageous integrity of a few public servants and government ministers. This was arguably the most blatant attempt yet known by commercial interests to seize control of the democratic government of a large country.

The testimony that started before Raymond Zondo last week of Angelo Agrizzi, the former chief operating officer of the facilities management and security company Bosasa, marked a distinct change in tenor. Although the evidence spotlights yet another business family, that of one of the Watson brothers, the testimony is very different from that which was presented regarding the Guptas.

It is less of the grand strategy of state capture and more of the tawdry mechanics of corruption.

The Guptas are Johnny-come-latelies, international business predators who had already been implicated in shady operations in their home country of India. They sensed fresh and easy prey on the South African veld and swooped in, literally, to commandeer Waterkloof Air Force Base as the first staging post of their pillage.

The four Watson brothers, in comparison, are local yokels and seemingly content with narrower horizons than the Guptas. Prominent political activists, they quickly parlayed their struggle credentials into empowerment-related business contracts, with two of them involved in the murky mining interests of Brett Kebble, and a third, Cheeky, charged in connection with a R200 million public transport system fraud. Youngest brother Gavin became the CEO of Bosasa.

The Guptas, on the face of it, wanted to run the entire ship of state, after successfully suborning its captain. Gavin Watson, on the face of it, couldn’t care a toss whose hand was on the tiller, as long as his company was assured of a steady cash flow.

Agrizzi claims Bosasa budgeted around R6 million a month in bribes, including – according to the testimony so far – to three National Prosecuting Authority staff, three former correctional services commissioners and their chief financial officer, to ANC parliamentarians and to top civil servants.

This was corruption on an industrial scale, executed with managerial efficiency.

It was, explained Agrizzi, better to lease the souls they corrupted on a monthly instalment, rather than paying lump sums.