His position as a chairman who is not independent is no longer tenable. Former Steinhoff chairman Christo Wiese during the company’s executives appearance at a parliamentary hearing into the Steinhoff scandal on January 31, 2018 in Cape Town, South Africa. Replying to questions, Wiese said, detecting fraud within a company was hugely difficult for board members‚ especially if the CEO was allegedly involved. (Photo by Gallo Images / Netwerk24 / Adrian de Kock)

At Monday’s annual general meeting (AGM), only 38.8% of ordinary shareholders voted in favour of his re-election as a director. Because of the high-voting deferred shares under the control of Wiese’s Thibault Square Financial Services, the resolution passed.

It is extraordinary that a full 61% of shareholders who voted would oppose the appointment of a chairman.

Wiese has been chair for nearly three decades (since 1991), a position that is not independent due to his direct shareholding in the company. The JSE Listings Requirements require the appointment of a lead independent non-executive director in instances such as these.

The announcement that highly regarded Professor Shirley Zinn would resign as lead independent director on Thursday was a shock.

Their exit is carefully managed (as was the case when predecessor Edward Kieswetter was forced to resign after his appointment as Sars commissioner).

Not only was Zinn’s resignation highly unusual and completely unexpected, but she was only appointed to the board in August 2018 and took the position of lead independent director in May. She had been in the role for just six months.

Zinn was leading the process to reform the retailer’s remuneration policy, which has been under tremendous scrutiny and has faced open dissent in recent years.

She told Bloomberg following the AGM that “succession planning in the context of the chairman” was discussed and that this “process” was underway. Wiese continuing as chairman is clearly a contentious issue.

Zinn told Business Day that she resigned for “personal reasons”. That’s nothing more than a non-answer answer.

Perhaps as lead independent non-executive director she felt her position was completely untenable? This is the only conceivable reason for her sudden exit.

Wiese, as ever, is feigning ignorance. He told Business Day that “as far as he was aware there was no antagonism within the board”.

“We had a very good board meeting after the AGM and discussed various issues and then on Tuesday we received a note [from Zinn] informing us of her resignation.”

Oh, to have been a fly on the wall in that meeting.

(Regarding the results of the vote for his reappointment on Monday, Wiese again feigned ignorance. He told Netwerk 24 that he “doesn’t believe that the vote results demonstrated distrust in him” … instead, he believes it was “part of a growing trend among institutional shareholders who increasingly demand independent chairpersons”.)

Shoprite also disclosed on Monday that the board is processing the nomination of Iaan van Heerden, a “financial advisor to Wiese’s family office”.

This comes after the failure of one shareholder, Shane Watkins of All Weather Capital, to get former Pepkor CEO Jan le Roux nominated to the board. Wiese criticised this ahead of the AGM and said it did not follow “usual procedure” (going via the board’s nominations committee). Wiese is chair of this committee.

Replacing Zinn with a credible director capable and willing to stand up to Wiese (if the best interests of Shoprite are put at risk) is going to be a big test.

Shareholders are still breathing many sighs of relief that Wiese’s bizarre attempt to merge the then Steinhoff Africa Retail (Star), now Pepkor, into Shoprite is a distant memory. The near collapse of Steinhoff in December 2017 put paid to Plan B – to acquire control of Shoprite via Star – too.

Nothing can take away from the remarkable achievements of Wiese, who could see the potential of retail and built Shoprite into the juggernaut it is today.

Indeed, he has done this a few times over with various businesses. His decision to buy OK Bazaars for R1 was derided at the time. Look how that turned out.

But why all this apparent resistance by Wiese to step down as chairman?

There is no question that he can continue to add immeasurable value as a director and as a significant shareholder. But it is precisely because of his misjudgements at Steinhoff and Brait that shareholders can no longer trust him to put the interests of Shoprite ahead of his own personal ones.

Following the (forced?) sale of shares last year, he is no longer Shoprite’s largest shareholder.

A controversial and abandoned proposal – initiated by Shoprite! – to buy Wiese’s deferred shares to simplify the company’s share structure in early 2019 suddenly looks cheap at the price (which equated to R3.3-R3.4 billion, depending on what dates are used).

The voting hurdle on this mooted transaction was an artificially high 85%, which meant that any meaningful dissent would see it fail. Wiese told Moneyweb editor Ryk van Niekerk on Tuesday that it was done this way as he did not want the 200 million additional Shoprite shares if there was significant shareholder pushback.

It is more than likely that a level of uncertainty is weighing on the stock because of these boardroom machinations.

The reputational hit Wiese has taken following the events at Steinhoff and Brait has certainly not helped. While many of Shoprite’s African operations are struggling, this doesn’t fully explain the 22% decline in its share price so far this year (at the low in August, the decline was 39.5%).

At the time of the deferred share plan, Coronation (with around a 5% holding) told Business Maverick that “the proposal was an extremely high price to pay to extinguish what is, in reality, a comparatively low level of risk”.

Shoprite clearly sees a future where it is not under Wiese’s control.

Given recent scheming, even R5 billion might be a bargain.

Then again, this drawn-out poker game may yet spring a surprise. Wiese’s ‘liquidity challenges’ could mean Shoprite acquiring these shares for much less than the original plan. And a once-off cash payment would be so much neater, wouldn’t it?

The Shoprite share has seen quite a decline this year 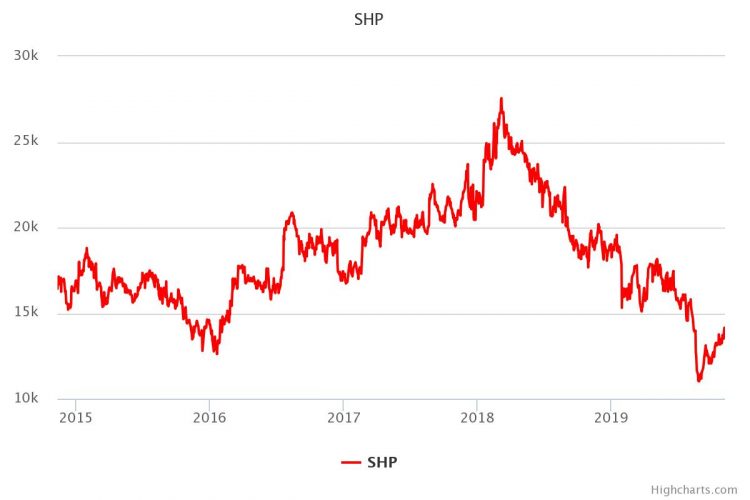