The continuing fallout from its already shattered neighbour will prove to be another big problem for South Africa too. 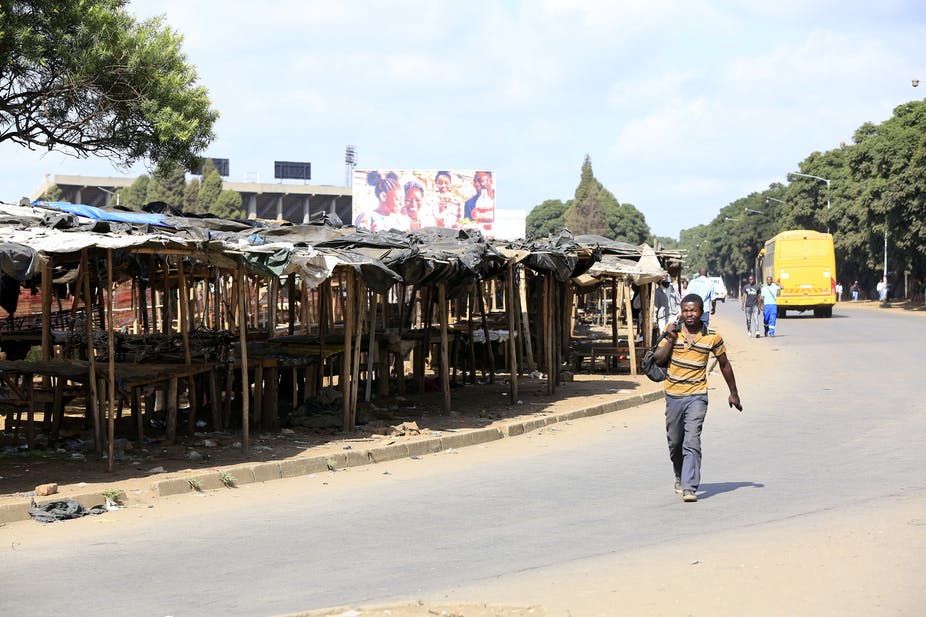 Hawkers’ stalls in Harare, Zimbabwe, lie deserted following lockdown in a bid to slow down the spread of the coronavirus.EFE-EPA/Aaron Ufumeli

The Covid-19 pandemic has left Zimbabwe in an extremely difficult situation. As of early April, the number of infections and deaths from the pandemic appeared low, although the available data isn’t necessarily reliable.

President Emmerson Mnangagwa announced a 21-day lockdown which began on 30 March, in a bid to contain the spread of the coronavirus. The decree ordered all citizens to stay at home, “except in respect of essential movements related to seeking health services, the purchase of food”, or carrying out responsibilities that are in the critical services sectors.

Other measures include the shutting down of public markets in the informal sector, except those that sell food.

None of this will be easy to implement in Zimbabwe.

The country has an economic profile similar to that of many developing countries. The difference is that its informal sector makes up a much higher percentage of the overall economy. According to a 2018 International Monetary Fund report, Zimbabwe’s informal economy is the largest in Africa, and second only to Bolivia in the world. The sector accounts for at least 60% of all of Zimbabwe’s economic activity.

In addition to the usual problems faced by countries with large informal economies, including poor governance and low tax revenues, Zimbabwe has an added set of problems: its economy is broken.

To implement the nationwide lockdown Mnangagwa is likely to have to inflict further damage to an already extremely fragile economy.

The president did not announce a stimulus financial package to cushion business from the impact of the lockdown. This might result in the total collapse of some businesses.

Zimbabwe’s economy has been shrinking since 2000, triggered by the government’s controversial land redistribution programme of that year. The violent programme wreaked havoc on agriculture, which was then the mainstay of the Zimbabwean economy.

This was compounded by subsequent sanctions imposed by the West in response to the seizures of white-owned farms and land.

Around 6 million Zimbabweans – about 34% of the population – live in extreme poverty.

The IMF recently gave a very bleak assessment, saying the country’s economy had contracted by 7.5% in 2019. It put the inflation rate at over 500%, meaning the country was heading back to the traumatic hyper-inflation era of 2007/8, when inflation peaked at an official 231 million percent.

The IMF report shows that Zimbabwe’s economy performed the worst in sub-Saharan Africa in 2019. Its prognosis is disheartening, showing that if

…governance, and corruption challenges, entrenched vested interests, and enforcement of the rule of law, (were not observed) then … there is little prospect of a major improvement to Zimbabwe’s economic and financial challenges in the short to medium term…

The dire economic situation is further worsened by the fact that the country is suffering its worst hunger crisis in a decade, largely due to an ongoing drought that started last year. The shortage of essential foods, such as the staple maize meal, often results in stampedes at the few markets where they can still be found.

The consequence is that the informal sector has grown exponentially. It’s estimated that a staggering 90% of Zimbabwe’s working population is employed in this sector.

I have been doing research on Zimbabwe’s informal sector for the past 12 years. I have found that it sustains many families’ livelihoods, even though the majority of participants in the sector live from hand to mouth as petty traders. This reality that confronts Zimbabwe’s informal economy is corroborated by research by the Labour and Economic Development Research Institute of Zimbabwe.

In addition, almost everyone who is employed in the formal economy augments their income through informal sector activities such as cross-border trading.

Reliable numbers are hard to come by, but a very high number of Zimbabweans eke out a living in this sector, or rely on it for food, clothing, fuel, local currency and forex.

The lockdown in Zimbabwe is going to provide a stern test for its informal economy, which is the country’s dominant economy. Most traders are subsistence traders and are already mired in extreme poverty. The jury is out on the extent to which they will observe the lockdown.

The government should immediately put in place a stimulus package that can cushion the informal economy.

Otherwise, a lot of livelihoods are going to be destroyed. The ramifications for the country and the whole region, especially neighbouring South Africa, will be grim.