Sadtu has expressed its concern over the lack of focus on the multifaceted crisis in basic education, particularly in disadvantaged communities. 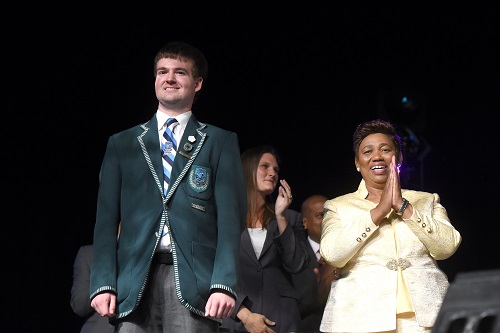 Top student Conrad Strydom his honored for his accomplishments for the 2016 matric final examinations during the official announcement of the matric results held in Midrand 04 January 2017. Picture: Refilwe Modise

The matric pass percentage is superficial and misleading, according to education lobbyists Equal Education (EE).

Thousands of matric pupils were last night expected to follow the tradition of descending on national and regional newspaper houses at midnight for their long-awaited results. This and the “preoccupation” by government with the matric pass rate failed to emphasise the grassroot developmental issues ailing basic education in the country.

“Equal Education has repeatedly cautioned against the national preoccupation with the matric pass rate,” it said in a statement yesterday.

For one, the pass rate reflected only the performance of those pupils who managed to stay in school for 12 years and obscured how many dropped out along the way.

Meanwhile, the SA Democratic Teachers’ Union (Sadtu) also expressed its concern over the lack of focus on the multifaceted crisis in the basic education system, particularly in disadvantaged communities.

The union’s Mugwena Maluleke said that if the system worked more efficiently at the stage of early childhood, matrics would not have the pressure they faced today to produce favourable results.

“It is unfair because in terms of the National Development Plan, the emphasis must be put on early childhood development so that we can introduce and socialise children into education at an earlier age,” said Maluleke.

This would avoid unnecessary pressure on matrics to perform without that foundation. And there would be no need for extra classes and for teachers to sacrifice their weekend and holidays if there was a proper base and a foundation for these pupils.

“If there is more emphasis and spending on matric students, then we are investing more on the exit point of this rather than the input level,” said Maluleke.

“Maths is a gatekeeper for a lot of courses at university. You cannot do engineering or architecture or geography without maths.

“We are emphasising maths to a degree because we need electricians, we need plumbers; we don’t just need people with degrees,” he said.

“Teachers are asking for training and we need to pay attention to not just teacher content but pedagogical knowledge (the art or science of teaching).”