Sasco threatens protest action after UP restricts access to campus

Sasco alleged its volunteers were prevented from assisting students at the university's premises and told to return on January 18. 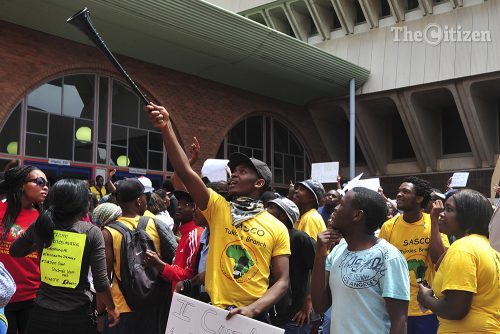 Student protests could return to the University of Pretoria sooner than expected.

That’s because the South African Students Congress (Sasco) has threatened to mobilise resistance against the institution’s decision to restrict access to its main campus after opening this week.

The decision follows an alleged incident, in which the student body said its volunteers were prevented from assisting students at the premises and told to return on January 18.

According to Sasco spokesperson Buthanani Goba, the body’s volunteers were stopped from helping students with their registrations and moved to the university’s sports grounds on Monday morning.

It was there that the organisation said it was shortly met by police and security personnel, who instructed them to disperse.

In a statement on Thursday, the body expressed concern with the effect of these recent events on students from poorer backgrounds, “who would struggle to navigate the university’s application processes”.

“We view this as an act of provocation, especially when one considers the fact that the university failed to address certain administrative matters in the 2016 academic year that eventually saw students shutting down the campus,” it said.

“Shutting down campus means political student organisations that have historically been at the forefront of assisting student application and registration-related queries do not have access to their tools of trade in their offices on campus. And this, in the main, affects poor students.”

Goba said the university’s response to their grievances was arrogant.

He alleged that Sasco members were threatened to relegate the registration process to the online platform, meaning those without internet access would struggle to apply for financial aid.

He said Sasco had given the university three days to respond to their demands, failing which, they would protest.

Among their demands are that the institution grant access, allows student organisations to assist students and remove bouncers and police on campus.

The University of Pretoria issued a statement confirming the campus is open to students who require access.

“While the academic year has not yet started, students should follow the normal administrative procedures, through their respective faculties and departments, to apply for access to be allowed on campus.

“For any registration-related issues, students have a wide range of channels which they can use including the University website. Students without internet access can call the telephonic registration help service on 012 420 5347 or the Temporary Student Committee (TSC) on 012 420 6554. Recognised student societies on campus are encouraged to work with the TSC to assist students.

NSFAS applications are no longer administered by the University and students are referred to www.nsfas.org.za for more information.”