The woman had just pulled up outside her best friend’s home. 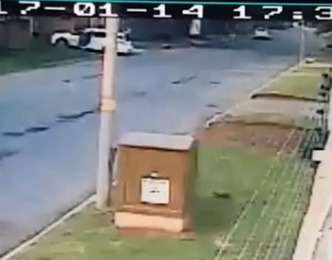 Screen grab of the hijacking.

A woman and her cousin have been left traumatised after they were hijacked in Edleen, in Kempton Park, Gauteng, on Saturday evening in less than a minute, Kempton Express reports.

The woman, 32, had just pulled up outside her best friend’s home on Aandblom Street at about 6.30pm and was waiting for the gate to be opened for her.

The incident was captured on CCTV footage and at first shows the victim’s car – a white Mazda 3 – parked outside the gate of the residence.

A few moments later, a silver Hyundai Getz can be seen coming down the road and coming to a halt just after passing the Mazda, and two men immediately emerge from the Getz running towards the driver’s door, while a third one follows behind them, walking.

At the same time the woman’s best friend was walking from the house towards the gate and saw what was happening.

“I immediately screamed for her to move, as I saw the armed hijackers go to her car,” the woman’s best friend, also 32, said.

While the first two got the women out of the car, the Getz drove away while the third hijacker ran after it.

A moment later, one of the hijackers also ran down the street, with his accomplice following behind him in the victim’s vehicle.

“At that time my husband jumped over the fence and ran after the car.”

The hijackers also got away with the victim’s handbag, which contained her wallet, ID, driver’s licence and other valuables. The whole incident lasted 45 seconds.

Edleen CPF and police arrived on the scene shortly after the incident.