The culpable homicide accused, Preshalin Naidoo, elected not to testify in court. 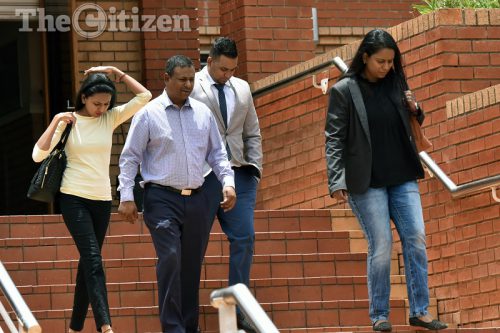 Motorist Preshalin Naidoo (second from R) outside Randburg Magistrates court in Johannesburg, 12 December 2016, . He was involved in a car accident with Top Billing presenter Simba Mhere and his friend Kady-Shay O’Brien i. Naidoo‚ 24, faces two charges of culpable homicide, relating to the car crash in which Mhere and his passenger O’Brien died. The crash which involved three cars happened in January 2015.Picture: Nigel Sibanda

Forensics experts who were due to testify on Wednesday in the culpable homicide trial of Preshalin Naidoo, the man accused of killing TV presenter Simba Mhere, will take the stand on Thursday.

The matter was postponed in the Randburg Magistrate’s Court on Wednesday after Naidoo appeared briefly. But the court heard the experts would only be in Johannesburg on Thursday. The culpable homicide accused has elected not to testify in court.

On Tuesday, the state closed its case after two experts from Car Track and King Price insurance gave details of Naidoo’s driving behaviour leading up to his VW Polo GTI crashing into Mhere’s car and another vehicle on William Nicol Drive in Fourways, Johannesburg.

The credibility of these witnesses were questioned by defence advocate Francois Roets, who subsequently applied for a discharge on all counts in terms of Section 174 of the criminal procedure act.

Mhere died on the scene in January 2015 along with his friend, Kady-Shay O’Bryan, while Mhere’s father‚ Joseph, who was also in the car, survived.

Naidoo’s defence is expected to expand on Roets’s argument that the state was not able to rule out a mechanical fault on the accused’s car and attempts to prove that the Car Track data suggesting Naidoo was above the speed limit moments before impact was inaccurate.