About 50 000 students have been turned away by the National Student Financial Aid Scheme (NSFAS). Out of a total of 161 938 applications received, 53 043 were unsuccessful, with 3 760 applications under review, NSFAS chairperson Sizwe Nxasana said at a media briefing in Pretoria yesterday.

“There are two reasons for unsuccessful applications, one being failing the financial means test. “We receive applications from those who come from households that earn above the R122 000 limit. “If a student falls under the missing middle, they will not be funded by NSFAS.”

The second reason, he said, was poor academic results. Students who pass more than 50% of their modules but have exceeded the regulated time of completion for the said modules, would be disqualified for funding, he said.

“We have communicated with these unsuccessful applicants and have announced an appeal process available to them. Unsuccessful students can lodge an appeal by downloading an application form on the NSFAS website,” Nxasana said.

Appeals should reach NSFAS on or before February 28. Last week, Tshwane University of Technology shut three of its campuses following protests and unrest when students complained of inadequate accommodation.

Students at the University of Pretoria shared images on social media of students sleeping in toilets and passages, claiming they were not placed in residences. But Nxasana said the universities and Technical and Vocational Education and Training (TVET) colleges were responsible for deciding if NSFAS-funded students should be placed in residences or private accommodation.

“Additionally, NSFAS does not have any relationship with private accommodation providers and we are not involved in any accreditation process.”

After the higher education department allocated R15 billion for the 2017 academic year, a total of 309 788 students would be funded by NSFAS this year, with an additional 100 000 students expected following the closure of applications last Friday.

“We do realise that our system did not go smoothly in all areas and would like to apologise to all students who have been inconvenienced in one way or another,” Nxasana said.

He added that most of the problems relating to returning students had been addressed. 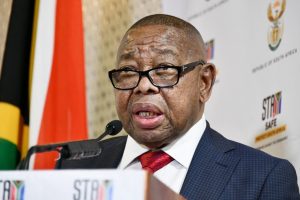