This follows attempts by Thai police to arrest a Buddhist temple’s former abbot on charges of money laundering. 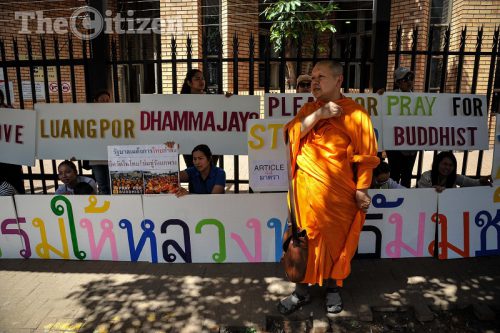 Members of the Johannesburg Meditation Centre Protest outside the UN offices in Pretoria against section 44 of the Thailand Constitution, 8 March 2017, Pretoria. Picture: Jacques Nelles

The Johannesburg Meditation Centre (JMC) on Wednesday handed over a letter to the United Nations (UN) office in Pretoria asking for support against the ongoing violation of Buddhists’ human rights in Thailand.

Hundreds of Thai police and soldiers surrounded a Buddhist temple belonging to the controversial Dhammakaya sect just outside the capital Bangkok last month. They want to arrest the temple’s former abbot to face charges including for money laundering. The JMC said the Thai government was preventing monks from going to the temple to pray.

The letter, drafted by Phra Kitsakol Phaenoi, director of the JMC, states: “They’re refusing investigative reports from the state’s anticorruption agency, which confirm there was no money laundering.”

Yati Bun, a JMC member, said: “They are trying to attack and abuse our temple. We are out here today to be the representatives of the Thai people and to let the world and the UN know that we’ve come to ask for peace.”

The letter was received by Pinky Phihlela in the Office of the UN in South Africa.

DA blames ANC for fires in Isipingo, as angry voters demand a recount
2 weeks ago
2 weeks ago

DA blames ANC for fires in Isipingo, as angry voters demand a recount
2 weeks ago
2 weeks ago