'It is important to let people know that the video posted on social media only reflects a part of the truth.' 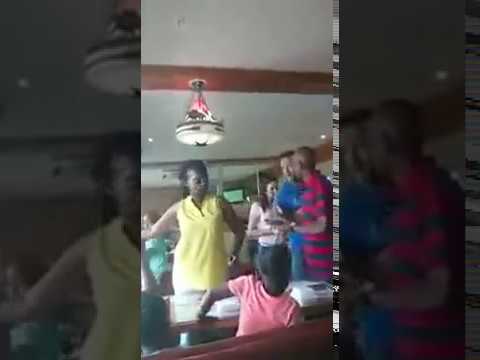 A tornado of remarks regarding the incident that happened at the Texamo Spur in The Glen Shopping Centre on Sunday have been posted on social media.

The incident showed a man and a woman – both parents of children who had caused havoc in the playground – yelling profane remarks at each other.

Since the incident, various eyewitnesses have contacted the Krugersdorp News stating that they saw what really happened.

Johan Lloyd and his wife were sitting next to the playground against the glass divider when the havoc started.

Lloyd said he noticed a large group of children playing next to him. Suddenly, one child grabbed another by the arm and hit her in the face with the back of his fist.

“The girl that was struck immediately ran out of the playground to her dad,” said Lloyd. “She was crying and holding her face.”

Her dad, who is believed to be a resident of Krugersdorp, asked what had happened, and she told him she had been hit in the face by another child.

“The man then walked calmly over to the group of children his daughter pointed out,” said Lloyd.

“I heard him introducing himself to the woman sitting among the children and saying that he had a slight problem. He then asked the woman very politely to discipline her child because he had hit the girl in the face. He also said she should please just talk to her son because ‘it’s not on’.

All of this occurred before the people sitting next to the table took out their camera and started recording the incident.

The man then asked the woman why she had started cursing him. At this point, the customers at the next table took out a camera and started recording – and this is when the ordeal on camera started.

It is alleged that when the incident became heated, a waiter approached Lloyd and asked him to speak to the man, who was fairly angry.

“I told my wife to go get the kids and got up to calm the situation,” said Lloyd.

Lloyd can be seen intervening in the argument – he is the man with the red shirt.

“I told him to leave it because she was provoking him and he turned around to walk out.”

After the incident, Spur’s management spoke to the man, who then left the restaurant.

“I feel that if both the customers had been more accommodating towards each other, they could have prevented the whole ordeal.

“It is important to let people know that the video posted on social media only reflects a part of the truth, as events prior to the video were not recorded.

“This was definitely not a normal Spur family day,” said Lloyd.

Spur has apologised to the woman in the video, Lebohang Mabuya, and confirmed that their own CCTV footage showed the man had grabbed her child “in an aggressive manner and his actions are unacceptable”.

In a statement, Spur said: “We have reviewed our CCTV footage of the incident and can confirm that Ms Mabuya’s version of events is accurate.

“We affirm our decision to ban the male customer from our stores. Physical aggression towards our customers‚ particularly against women and children, will not be tolerated.

“We acknowledge that the staff and management of the store did not sufficiently assist Ms Mabuya. We have addressed this with the store management and we are reviewing our internal procedures to ensure that restaurant staff are better equipped to manage an incident such as this. We also recognise that Ms Mabuya apologised in recent media statements for her inappropriate language used in this incident.”

Spur CEO Pierre van Tonder also said they planned to offer Mabuya and her family trauma counselling and any other support where possible.

“I would like to again make it very clear that as an organisation we do not condone any forms of violence against women or children‚ irrespective of the circumstances.

“As an organisation we have learnt a valuable lesson and it is my priority at this stage to ensure that should something like happen again‚ our staff will be sufficiently prepared.”