Gauteng department of social development alleges striking Nehawu members had a hand in the death of a six-month-old child. 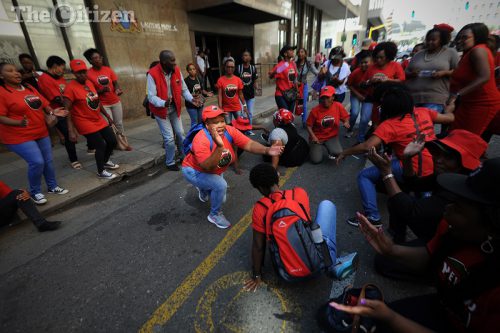 NEHAWU members protest outside the Gauteng Premier's office in Johannesburg, 22 March 2017. NEHAWY has been on strike since the 13 March 2017 in dispute to the Rural Allowance for social service professionals as well as entry level salaries for professionals. Picture: Refilwe Modise

Workers in the social development sector affiliated to Nehawu embarked on an indefinite nationwide strike during the time when concerns were raised about the unresolved social grants matter that ended up in the Constitutional Court. At the time, the union vowed the strike would continue until workers’ demands were met.

Among others, labour is demanding the introduction of a rural allowance, the absorption of unemployed social workers on a permanent basis as well as improved conditions of service for all employees in the department.

Speaking to The Citizen on Wednesday, national spokesperson for Nehawu, Khaya Xaba, said the Gauteng department was declaring war with the union, with allegations that striking union members had a hand in the death of a six-month-old child.

According to the department, the deceased was one of the 90 children who were moved from the department’s child and youth care centre to another.

“The children were moved on Friday as striking workers barricaded entrances at the affected centres barring essential supplies such as food, medication and laundry.”

However, Xaba denied the claims, accusing the department of lying.

“The children were not moved on Friday as the department claims … in fact, they were already moved on Tuesday last week.

“This is a declaration of war by the department and we are ready,” he said.

MEC Nandi Mayathula-Khoza said in a meeting they had with Premier David Makhura on Tuesday that he indicated the provincial government may be forced to request the assistance of the SA National Defence Force to assist in rendering services to the vulnerable beneficiaries if the current situation does not change for the better.

“As we do this we appeal to our workers to exercise their right to strike and to be mindful of the communities and beneficiaries that we serve,” she said.

Mayathula-Khoza said it was still unclear what caused the little girl’s death, but stressed the fact that she, along with other children, had to be moved due to acts of violence, which made work to protect children very challenging.

Commenting on the strike, Nehawu’s Xaba said talks with the employer continued on Wednesday.

“The outcome of those talks, which will determine the way forward, will be made public soon,” Xaba said.

Suicide statistics alarming ahead of festive season
5 days ago
5 days ago
PREMIUM!

Suicide statistics alarming ahead of festive season
5 days ago
5 days ago
PREMIUM!