KwaZulu-Natal residents are asking how the fire broke out; how it was able to spread so rapidly and how safe their homes are in the event of a blaze at more toxic facilities closer to home. 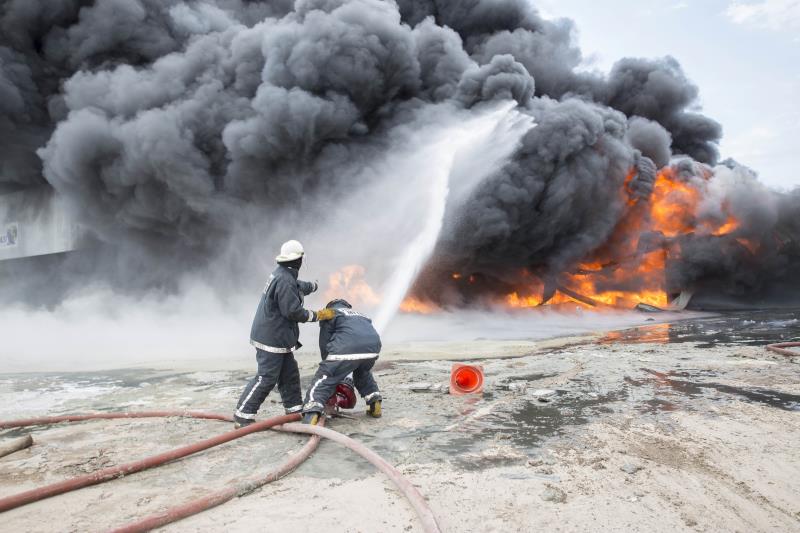 Firefighters work to extinguish the blaze of the Durban fire. Picture: Chris Botha

As the dust settles on the fire that raged though a Bayhead-based warehouse, in Durban, KwaZulu-Natal, for three full days, local communities are now turning their attention to the future and how to prevent such a catastrophe from reoccurring, reports the Southlands Sun.

Locals are asking how the fire broke out; how it was able to spread so rapidly and how safe their homes are in the event of a blaze at more toxic facilities closer to home. There appears to be few official answers to these questions.

The South Durban Community Environmental Alliance (SDCEA) hopes to get answers at a public meeting at the Bluff’s Pigeon Hall on Thursday from 6.30pm to 8pm. They have invited governmental officials and local experts to talk about the fire and its impact on surrounding communities.

As the smoke blacked out much of the sky on Friday, many panic-stricken people took to the internet to find out what was happening and if their lives were in danger. Rumours of a mass evacuation and toxic clouds spread almost as rapidly as the warehouse fire, causing a frenzy.

eThekwini Municipality has been taken to task by SDCEA for the continuing lack of a formal emergency response and evacuation plan.

With the fire under control, communities are not only looking to the future, but expressing their admiration for the gallant firefighters who faced the flames for days on end.

Many people posted messages of thanks on social media.

A group of Bluffites hope to show their immense appreciation for these emergency responders.

“We take so much for granted and never give a second thought to those who are committed to our safety and wellbeing – those who arrive at a severe car accident to extricate the injured; those who risk their very lives to fight a blazing, unpredictable and raging fire. Those are our heroes, our fire fighters,” said Bluff Ratepayers and Residents Association’s (BRRA) Mark Jacobs.

A fundraising drive is being headed up by the BRRA to show its unending gratitude towards the firefighters who worked tirelessly to combat the blaze and who battled on despite fatigue, thirst and hunger.

“We are so grateful to these men and women for what they did and what they sacrificed to protect us,” said BRRA’s Ivor Aylward.

“As the established BRRA we are in awe of the remarkable and resounding commitment of our fire fighting teams. We stand proud, shoulder to shoulder, and salute you all for your bravery and commitment.

“We also recognise the efforts of dedicated medical teams and personnel, policemen and women, hazmat and special chemical teams and agents. Your lives matter and your presence in our communities will never be forgotten. Thank you.”

With the assistance of the community, the BRRA hopes to host a ceremony to honour the firemen and other emergency personnel who answered the call to save their homes. The event will pay tribute to their valour and offer them acknowledgement and rewards for their work.