Vavi urged Treasury employees to resist attempts to sway their targets in a bid to please certain individuals. 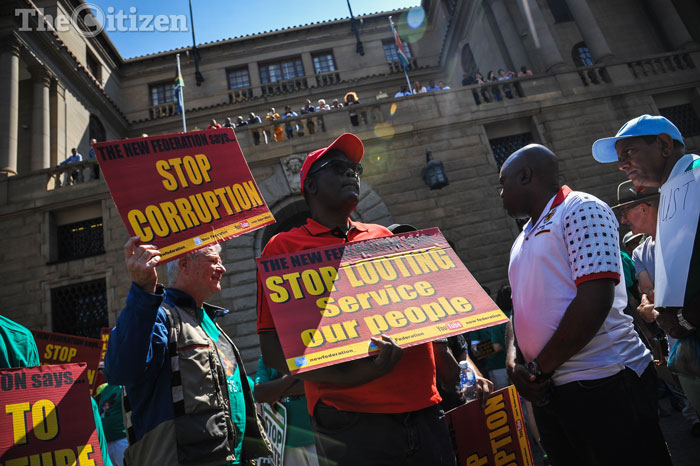 Zwelinzima Vavi and Save SA members demonstrate outside the National Treasury while they await Pravin Gordhan, the now ex-minister of finance, to address them, 31 March 2017, Pretoria. Picture: Jacques Nelles

The midnight Cabinet reshuffle effected by President Jacob Zuma was tantamount to a coup against the people of South Africa, activist and trade unionist Zwelinzima Vavi said in Pretoria on Friday.

“We are demonstrating to express our disgust at what happened last night, which can only be interpreted as a coup against the people of South Africa. The thieves have now taken over the Treasury. They now have their palms, their long fingers on the kitty of the nation and they will be able to do whatever they want from now on,” said the former secretary general of Cosatu. 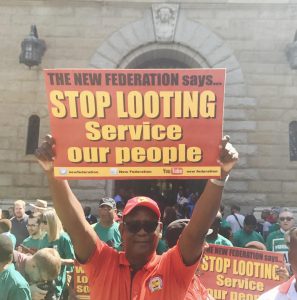 “We know that the staff in the National Treasury are in pain. They cannot believe that in the South Africa they have helped to build, this was to be possible. It has been a very long painful journey to a total capture of every institution of our democracy. This, for them is the final stop. They have achieved what they could not have imagined that they could achieve.”

Vavi charged the numerous employees of the National Treasury to resist attempts to sway their targets in a bid to please certain individuals.

“Resist. Tell us in one way or another of whatever shenanigans they are going to be implementing when they come over. Stop corruption. Don’t collaborate with crime. This is the darkest hour in the history of South Africa, but we can promise you one thing, tomorrow is going to be better than yesterday. Zuma and his thugs will not have the last say,” said Vavi who now leads the South African Federation of Trade Unions.

Vavi was joined by hundreds of Save South Africa activists during a protest against the recent firing of finance minister Pravin Gordhan, his deputy Mcebisi Jonas and other members of Cabinet.

The march started off at National Treasury offices in Pretoria central before heading to the Union Buildings. 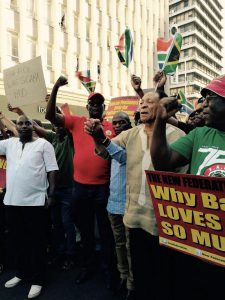 Save SA convenor Sipho Pityana said Gigaba was far from being a Mr Clean.

“Today, [Gupta owned] ANN7 is running a programme on TV, saying Mr Clean has been appointed to take over Treasury, referring to Malusi Gigaba. Don’t be fooled. The crisis at state owned enterprises started during his tenure as minister of public enterprises. The State of Capture report highlights all the shenanigans that happened that happened at Transnet during his tenure. Now it will be shenanigans across the spectrum of state owned enterprises and everywhere were there are finances,” said Pityana.

“This country has to stand up and fight against this. This is not just a fight against corruption. This is a fight in defence of our very own sovereignty.”

While the DA has failed in its urgent application at the Western Cape High Court on Friday seeking to interdict the swearing in of the newly reshuffled Cabinet members, the party is joined by other organisations in mobilising mass action against Zuma.

Maimane told reporters on Friday morning at the OR Tambo International Airport that he would “fight to the end” to see the president removed.

Various opposition parties and organisations have indicated they would be joining efforts to call Zuma’s removal from office with a planned march in Johannesburg on Monday led by the DA.

Maimane also called on all members of parliament regardless of political affiliations, to join the growing calls to action against the beleaguered president.

“This is not a party issue, its a South African issue. It’s for all of us and we will pull every resource we have. That is why I have compelled our legal team, they will be working flat out in the next number of days to make sure that firstly, the interdict succeeds and secondly that the president is ejected by parliament. It’s a time for all of us to find the courage to say to all those leaders in the ANC, particularly the members who have been removed, it is time for us to vote.”

WATCH: Malema shoots from the hip, talks about ‘some c*nt’