Cannabis can now be grown, smoked at home, court rules

The court ruled that current legislation did not pass Constitutional Court muster, and that parliament had two years to rectify the laws. 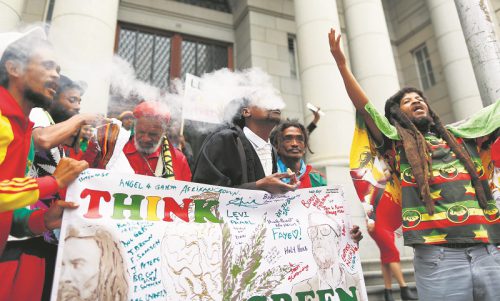 South African advocate Mbonisi Nkita (C) reacts with members of the Rastafarian community after the ruling legalizing Cannabis outside the Cape High Court in Cape Town, South Africa, 31 March 2017. The Western Cape High Court 31 March 2017 ruled it will allow people to possess, cultivate and use Cannabis at home. The law that made it illegal has been removed. Parliament has 24 months to write it into statute. EPA/NIC BOTHMA

Dagga smokers can breathe a sigh of relief and inhale a puff of ganga – after the high court in the Western Cape declared it legal to grow and smoke dagga in their own homes.

The court ruled that current legislation did not pass Constitutional Court muster, and that parliament had two years to rectify the laws. This means from Saturday no-one smoking or growing weed in their homes can be arrested or face prosecution.

Jeremy Acton from the Dagga Party said since 2011 he had been fighting for his rights. He has been arrested five times over dagga-related charges.

“Obviously this judgment is only the first opening of a door, but we have two years to determine how the new law will really look. Needless to say, it [dagga] will have to be de-scheduled in the illicit drugs act and the Medicines and Related Substances Act.”

Acton isn’t overly concerned about any fallout from the ruling from a full bench, including Judge Dennis Davis.

“Anything can be abused, but fortunately cannabis abuse does not result in death by overdose. All moderate recreational use is medically beneficial as preventive medicine against onset of ailments relating to ageing,” he said.

“Getting off cannabis does not entail major withdrawals, and only needs a personal decision to stop. Cannabis use is part of a healthy sovereign lifestyle, so I am not really concerned with addiction issues or harms arising from recreational use. We are all using it already anyway,” Acton said.

Parliament, which now has a deadline to amend legislation, said it acknowledged the ruling to change sections of the Drug Trafficking Act and the Medicines Control Act. Spokesperson Moloto Mothapo said parliament was in the process of obtaining the judgment to study it.

“If the two laws mentioned have been found to be unconstitutional, then the Constitutional Court would have to confirm the judgment before parliament can act,” he said, adding that the state was also in a position to appeal the ruling.

Once litigation was finalised, the Constitutional Court could instruct parliament to rectify defects in the laws.

This included dealing with defects in terms of the Medical Innovation Bill, currently before parliament and first introduced by the late MP Mario Oriani-Ambrosini as a Private Member’s Bill.

Oriani-Ambrosini died of cancer more than three years ago and was a strong proponent of marijuana as an alternative medicine to treat the disease. Acton said he was sureOriani-Ambrosini would be pleased to see the changes.

The changes do not bode well for big pharmaceutical companies.

“With respect, the Medical Innovation Bill (MIB) was hijacked for the interests of Big Pharma, and the entire dagga legalisation movement opposes the MIB,” Mothapo said. This judgment destroys the Medical Control Council guidelines recently published for the MIB, and puts the medicine securely into the hands of the people, he said.