Vavi was scathing in his attack of Zuma and the ANC following the axing of Pravin Gordhan as finance minister. 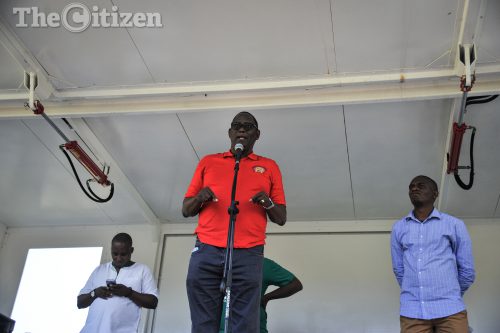 Zwelinzima Vavi says the African National Congress (ANC) is destroying all the foundations of democracy and believes South Africa has no future if the citizens ignore what the country is faced with.

Addressing people at the Union Buildings, Vavi said the ANC had achieved what it had always wanted to with the firing of Pravin Gordhan and his deputy Mcebisi Jonas.

Vavi claims ministers will now bring the Guptas’ advisers into their meetings.

He also added that all the people who were left in positions within the ANC were going to abide by what was happening or leave one by one.

He claims the party is organised like a machine, since they know who is supposed to talk in meetings and what they have to say.

“This is a full-blown attack on our democracy, comrades,” he said.

He slammed Gupta-owned news channel ANN7, which he alleged would try to badmouth all opposition to President Jacob Zuma.

He added that the ANC would also go on to celebrate this weekend, but the opposition could not back down.

Vavi said Save SA had a responsibility to work throughout the weekend to make sure communities around Gauteng and other provinces joined them in this struggle.

“We are going back to form a human chain and we are calling on a million people to join us and take back our country,” he said.

He added that they were calling on millions of people who were unemployed to come to demand the jobs Zuma promised and did not deliver.

“We call on all recipients of the social grants who are sitting on the edge fearing that they will not get what is due to them, to come up and say we deserve better than this,” he said.

Vavi also claims Zuma is out of control and Deputy President Cyril Ramaphosa is giving credibility to what is happening in his party and is powerless to stop it.

The former Cosatu leader concluded by saying that everyone who was complaining within the ANC should lie in the beds they had prepared themselves.