The DA also says it will lay a charge against the ANC for its 'war talk'. 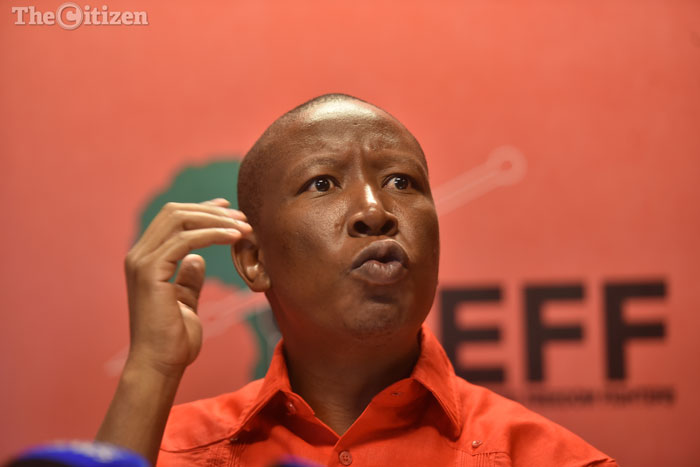 Leader of the Economic Freedom Fighters (EFF) Julius Malema has tagged his former comrade, newly appointed Minister of Police Fikile Mbalula, to alert him to the ANC Youth League’s apparent intention to burn down the EFF’s headquarters in Braamfontein on Wednesday.

The arson remarks were allegedly made by secretary-general of the Congress of SA Students (Cosas), Khulekani Skhosana – who threatened that the ANC Youth League (ANCYL) would burn the EFF’s headquarters should the party continue to “disrespect” parliament.

Since its introduction to parliament in 2014, the EFF has effected great changes in how parliament debates, and has on numerous occasions been forcefully chucked out of the House for allegedly breaking the rules.

The ANCYL’s spokesperson, Mlondolozi Mkhize, told The Citizen they were aware of the utterances made by Skhosana, but could not confirm or deny if the league would indeed burn down the EFF’s headquarters or whether they would take action against Skhosana for the remarks.

In response to EWN’s tweet in connection to Cosas’ threat, Malema tagged Mbalula – as an apparent alert to the threat.

Mbalula became an overnight sensation on Twitter soon after he was appointed as police minister when he encouraged people to report crime directly to him on Twitter under the hashtag #WanyaTsotsi.

Meanwhile, the league has also threatened violence against the DA in reaction to its plan to march to the ANC’s headquarters Luthuli House against President Jacob Zuma on Friday.

The league, which has defended the controversial Cabinet reshuffle of last week, said it would be waiting for the DA with sjamboks and other weapons. This forced the DA to change its planned route for the march. Instead of marching to Luthuli House, the party will start at the Westgate Transport Hub and end at Mary Fitzgerald Square in Johannesburg.

The party has since said it would lay charges against the ANC for their “war talk”.

“Threats of violence, incitement to violence and political intolerance are unacceptable in a multi-party constitutional democracy, and the DA will not accept this kind of language without challenge.

“Today the Democratic Alliance will lay criminal charges against the ANC and the individual speakers who issued these threats, and we expect the SAPS to review the footage and refer the charges for prosecution without delay.”

New Gauteng mayors' failure to appoint MMCs is a cause for concern, says Maile
12 hours ago
12 hours ago

New Gauteng mayors' failure to appoint MMCs is a cause for concern, says Maile
12 hours ago
12 hours ago