It’s not true that top three leaders were ordered to apologise to Number 1, says ANC

The ANC has decided to give President Jacob Zuma its full support following the Cabinet reshuffle that saw Gordhan and his deputy get fired. 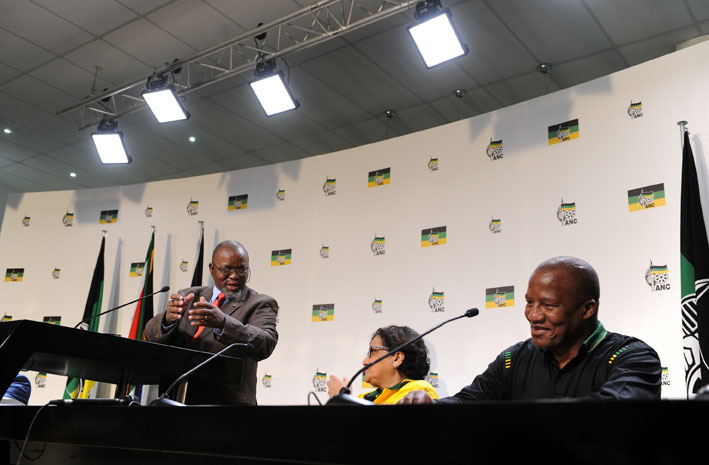 ANC secretary general Gwede Mantashe (L) jokes with deputy secretary general Jesse Duarte (C) and spokesman Jackson Mthembu at a news conference called by the party to react to the findings of the Nkandla report in Johannesburg, Thursday, 20 March 2014. Public Protector Thuli Madonsela released her report on costly security upgrades at President Jacob Zuma's home on Wednesday, saying Zuma should have asked questions about the scale, costs, and affordability of security upgrades which could end up being as much as R240 million. She found that Zuma and his family unduly benefited from upgrades. Picture: Werner Beukes/SAPA

ANC secretary-general Gwede Mantashe has poured water over reports that he, treasurer-general Zweli Mkhize and Deputy President Cyril Ramaphosa had to apologise to Zuma for voicing their discontent with the Cabinet reshuffle.

The trio broke ranks with ANC tradition and publicly criticised Zuma last week. Ramaphosa called the axing of former finance minister Gordhan ‘unacceptable’, while Mantashe said the restructuring of the Cabinet had been forced upon them and Mkhize said the ANC was no longer on top of Zuma’s priorities.

At a press briefing, Mantashe said the three leaders were not expected to apologise for their remarks. He admitted, though, that it could have been handled better.

“The length of the meeting collapses rapidly the rumour that we were put in this meeting, and President Zuma just lectured us, and we all cowered down and apologised‚” Mantashe said.

“The officials acknowledged that their public dissonance on the matter was a mistake that should not be committed again,” he said.

Mbete to reveal decision on no-confidence motion in Zuma soon