MK vets vow to protect Zuma, ANC with their ‘lives and limbs’

The ANCYL has also continued its war talk, saying those marching on Luthuli House would not leave ‘in good condition’. 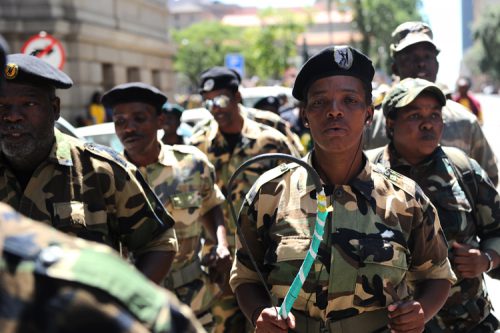 Following recent remarks by the ANCYL that it would defend Luthuli House should Friday’s planned marches go ahead, the Umkhonto weSizwe Military Veterans’ Association in KwaZulu-Natal has also taken a stand, saying it would defend the ANC and embattled President Jacob Zuma.

The youth league, speaking at a Zuma rally in Germiston, had on Tuesday warned those planning to march on Luthuli House that it was prepared to use “sjamboks” and any “weapons” at its disposal to defend the ANC.

This follows planned marches by political parties and civil society organisations on Friday, all united in their call for Zuma to resign as president.

Citizens have been urged to take part in the marches in support of the campaign.

MK vets said they were prepared to defend the president with their “lives and limbs”, should the planned march take place.

Chairperson Themba Mavundla said at a press conference on Wednesday that the MKMVA would send a contingent of 600 “combat-ready” soldiers to Luthuli House in defence of the ruling party and Zuma.

He also warned the “forces of darkness” and critics of the ANC to not test the MKMVA’s patience, saying it was not unlimited.

Mavundla further said the vets knew, based on historical missions, how to defend the party but would not comment on whether weaponse would be used in this instance.

The chairperson, who is also the head of the KZN community safety and liaison department, urged fellow vets to stop “counter-revolutionaries” in their tracks and position themselves well in defence of the ANC.

Zuma faces mounting pressure to step down following a recent Cabinet reshuffle as well as a downgrade by ratings agency S&P, which sent the rand into freefall and sparked outrage.

The ANCYL in Limpopo also said it “welcomes and applauds the decisions of the ANC national working committee to rally behind President Jacob Zuma during this difficult period in the movement. The ANCYL in Limpopo believes that all members of the ANC will now speak in one voice and act united against the external forces that are intend to divide the ANC and the country.”

“We commend the outstanding work and performance that the president demonstrated both in the ANC and in government towards radical economic transformation. The president is leading the train. We commend his agility and ability to effect change and he must continue to do so at all levels of government if economic freedom in our lifetime is to be realised,” said ANCYL provincial secretary Che Selane.

They warned that those marching for the removal of Zuma would not leave Luthuli House “in good condition”.

“We will take care of them and teach them proper and correct politics of the congress movement, because they were supposed to join us in a march against the banks and other strategic monopoly industries who robbed the government of South Africa and not complete projects that the government have awarded them.”