Mbalula says he’s not friends with Phahlane, but they’re cool

'It is solid from the onset,' said the new minister, who added that he intended to be tough on crime.

Police Minister Fikile Mbalula and acting national police commissioner Khomotso Phahlane are not friends, but they have a good relationship, Mbalula says.

“We are surely not friends, but we maintain a good working relationship,” the minister said at a press conference in Pretoria on Thursday where he announced Yolisa Matakata as the acting head of the Hawks.

“I can’t even say it is cordial because that would be like a real love relationship. It is solid from the onset. I have not met anybody who is frowning on me.

“I think everybody has been quite enthusiastic and looking forward to a working relationship. It would be unethical to predict how things will unfold, but I am definitely sure what I want,” the minister said.

He added that his primary job was to ensure that the rule of law was observed, but over and above that South Africa needed to intensify its fight against crime.

“Partnerships are going to be important. We have got to be where our people are terrorised by criminals. We must make it unbearable for criminals and we must squeeze them and make the space very small for them to run away.”

He accused the media of having “issues” with Phahlane.

“Phahlane is a good policeman and he has executed his mandate. We want to maintain it as such going forward,” Mbalula said.

He added that he still had to have a one-on-one meeting with Phahlane.

He said the term of suspended national police commissioner Riah Phiyega was coming to an end in June.

Mbalula added that the media should not play “marbles” with them and change the goal post from this person to that person.

“The new commissioner is not appointed like the public protector, but we will act transparently,” said Mbalula.

He said he intended to get rid of acting positions.

“The fundamental question is what does the man and women in the street say against the police service.

“We need the buy-in of all South Africans. Our people can’t be gripped by fear of gun-toting criminals running amok in our country. We must make it a point that South Africans feel safe.” 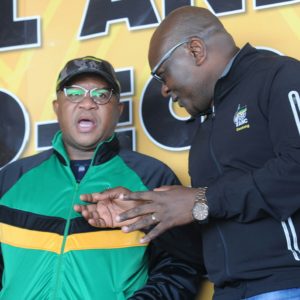