One victim was struck with a hammer, while a woman was admitted to hospital for shock. 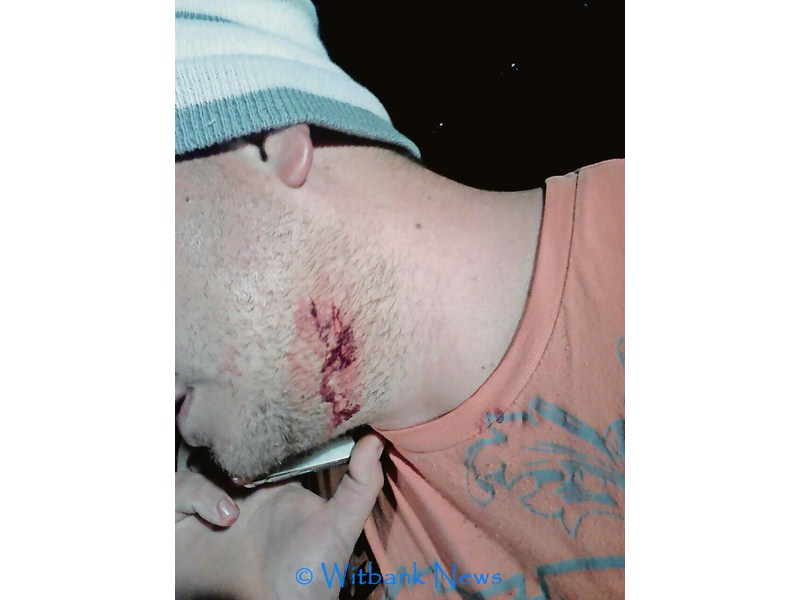 Mr Riaan Muller was stabbed during the armed robbery at Maanlig Resort.

A late-night fishing experience over the Easter weekend resulted in pain and suffering for holidaymakers in Mpumalanga, the Witbank News reports.

In the early hours of Monday morning a husband and son-in-law were baiting their lines in hopes of a catch, unaware that they would be beset by armed robbers.

The armed robbery took place at about 3.30am on April 17 at the Maanlig Resort.

“My fiancé Heinrich and son-in-law Riaan decided to stay up as the fish were biting. I decided to head to bed at 2am,” said Ms Annalie Oosthuizen.

She recalls how everyone along the dam banks were laughing and chatting, enjoying the last evening of the Easter weekend.

“I woke up at about 2.45am when Hein came into the tent. He was looking for crisps. I nodded back off to sleep. Around 3.30am I woke up again; the flap to the tent was open and I saw this big guy with a gun and torch in his hand. I honestly thought it was a police raid but then he put the gun to my head and told me to give him money,” she added.

Oosthuizen recalls the man telling her over and over “give me the money, give me the jewellery. I showed him I didn’t have a wedding ring. He reached into my shirt to see if I was wearing any jewellery around my neck,” said the woman.

“The one with the hammer threatened to hit me if I made any noise, the other told me to lie still and be quiet. I was too afraid to breathe; I lay there worrying about Hein, Riaan and my son Dylan,” said Oosthuizen.

Moments before the armed robber made his way into Oosthuizen’s tent, Heinrich Muller and his son-in-law Riaan Welman were readying their lines for another cast.

“I was putting a mielie bomb on the line; as I was casting, I looked back to make sure I was not hooking anything and saw a man with a gun,” said Muller.

The suspect cocked the firearm and told Muller to get down. Another suspect ran up to Welman and knocked him to the ground and started kicking him. Welman was also stabbed in the process. They told me to hand over our money and cellphones. I told them I didn’t have money on me. The guy with the gun walked over to Riaan and told him the same,” said Muller.

The robbers bound both Muller and Welman’s hands.

“One of the robbers grabbed a fishing pin and held it to my neck,” said Muller.

“At the time, the additional robbers were busy at the third site and a commotion broke out when one of the campers defended his wife and child from the robbers. They hit the man with the hammer and took his family’s belongings,” said Oosthuizen.

The robbers were reported to have made their way through the three camp sites, bringing the valuables back to site one, where the Oosthuizens remained still lying on the floor.

“They packed everything into our bags and the large guy carried it off like a pack mule,” she said.

She recalls how everyone was bound with shoelaces and material.

“The next moment the robbers started running,” said Oosthuizen.

Her fiancé managed to get to his feet and helped Welman to his feet. They both released their restraints and gave chase.

“I remember seeing at least six of them; there were a lot. We screamed for help as we chased after them,” said Muller.

Sector police arrived on scene followed by a rescue bakkie from Legacy Emergency Specialists that was shortly followed by police and an ambulance.

“Gene Jacobs went out first with the rescue bakkie in case the ambulance couldn’t make its way there due to the rain,” said Gavin Cooper of Legacy Emergency Specialists.

He added: “One of the men was taken to Life Cosmos Hospital for further treatment as he suffered blunt force trauma during the attack, sustaining injury to his left arm and leg. One of the woman suffered psychogenic shock and was escorted to the hospital in her private vehicle; we wanted to make sure she got there safely,” said Cooper.