Turnaround: man goes from being a drug addict to running 42km on crutches

His victorious run on Monday was captured by social cohesion activist Yusuf Abramjee and went viral. 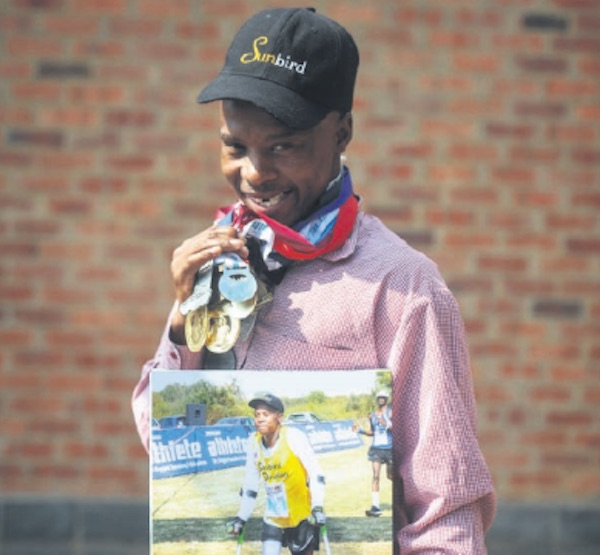 WINNER. Xolani Luvunu went from being a drug addict on the streets to recently completing the 42km Wally Hayward marathon. A year ago, Hein Venter, owner of Sunbird Perfumes, gave Luvunu a job and helped him conquer his addictions. Picture: Jacques Nelles

For six years he slept under a bridge in Sunnyside, had bone marrow cancer, was addicted to drugs and alcohol and, with only one leg to stand on, Xolani Luvunu, 32, would spend his days begging for money for his next fix.

Today, he has people across the globe rooting for him after he finished his first marathon on Freedom Day, wearing a prosthetic leg and using crutches.

Luvunu says this is all thanks to his “father”, Hein Venter, who rescued him from the streets a year ago, helped him kick his drug and alcohol addictions, gave him a prosthetic leg, a job and encouraged him to run.

His victorious run on Monday, followed by an ambulance and with Venter by his side, was captured by social cohesion activist Yusuf Abramjee and went viral.

I have real respect for this man. He has bone marrow cancer and is running @TheWallyHayward marathon. WATCH pic.twitter.com/bPE84rcIGX

It was far removed from drugs and crime.

Abramjee said South Africa needed more people like Venter; positive stories such as this were needed in the country.

While Luvunu and Venter were almost disqualified because they missed the cut-off time by 1hr 50min, Venter pleaded with organisers to allow them to complete the 42km.

“When we got to the 20km mark the organisers wanted to pull Xolani and me off. They allowed us to continue. We had no support other than the ambulance that joined us at the 25 km mark,” said Venter.

They got to the finish after 7 hr 2min.

“Bruce Fordyce has run the Comrades in 5hr 21min, but this was a splendid experience,” said Venter.

“About 50 meters from the end we were running on lose gravel and Xolani fell and broke his crutch. But I helped him and we got to the finish line.

“Other athletes just walked up to him and hung their medals, gold and silver, around his neck. It was absolutely incredible.”

One of the organisers then handed Luvunu a gold medal.

Luvunu said the road to true freedom from his alcohol addiction was not always easy and he kept falling off the wagon until Venter confiscated his prosthetic leg back and fired him.

He went begging for his job back, got his leg and joined Alcoholics Anonymous.

He is also active in his church, doing motivational speaking.

Luvunu has set his sights on the 2018 Comrades Marathon.

Amputee runner Xolani Luvuno speaks to the media. He ran 40km on Monday. He has bone marrow cancer. Live shortly on my timeline. pic.twitter.com/3h4xCTdPGp

I will be hosting a live chat with amputee runner Xolani Luvunu at 11am today. He ran 42km on Sunday. Follow on timeline. pic.twitter.com/5RinYctrJb