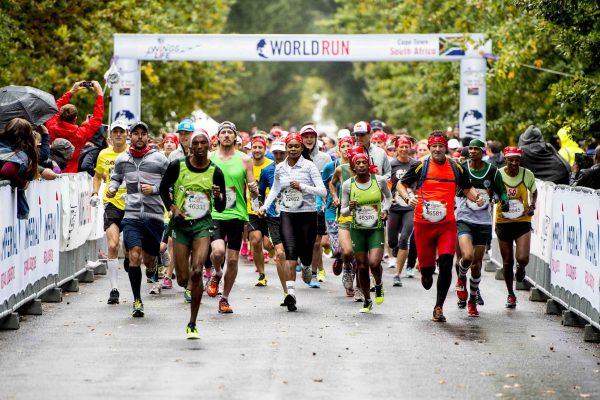 Roets, who was paralysed after a motorbike accident in 2009 on his way to the Klein Karoo Nasionale Kunstefees in Oudtshoorn, was not serenading the runners but took to the road and was huffing and puffing to the finish line like the rest of them.

The challenge was not to finish the 21km run but to see how far you could go. There were many people who took part for those who couldn’t run. Everybody had to start at the Supersport Park, and, in a fun aside 30 minutes into the run, vehicles were deployed to catch up with the runners.

If a car drove past a runner, a sensor would go off indicating that they had finished their run, whether they were at 4km or 20km. Founder of the One Chance At Life (Ocal) Nicolene Mostert said: “Disability is something that you create within yourself … that disables you from living a life that is full and meaningful.

“We don’t need to feel a sense of pity towards people who are differently abled. They want to be treated equally like all of us and you can still have a normal and meaningful and active life, full of adventure and amazing moments – just in your differently abled body,” Mostert said.

Among the runners were a group of 12 strangers – 10 able-bodied and two hand cyclists – who met for the first time on April 27, to race through the heart of SA to raise awareness of disabilities and to raise funds for the Tembaletu School for pupils with Special Education Needs.

Mostert said the Ocal 2017 Journey for Change was not only being run to raise awareness around disability but would also raise funds to purchase sporting equipment and installing sports facilities at the school.

She said each member of the team brought their own different strengths and different weaknesses, but they all shared a single cause: to challenge the global belief system around disability. “The mission and aim is to ensure that we create a physical and active environment for the differently abled children, one school at a time.

The pupils who attend this school will be part of Ocal’s ongoing journey and commitment, knowing how crucial education is in bridging the inequalities that are present within this nation of ours,” Mostert said.