The Ekurhuleni council has promised residents their problems of lack of sanitation and services will be resolved. 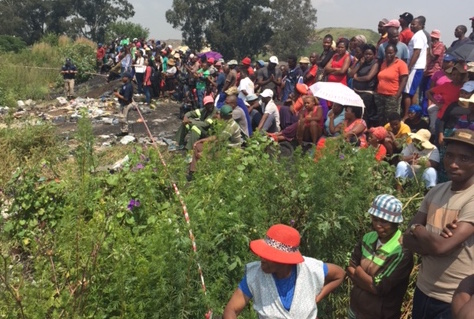 Around 350 community members of the Jerusalem informal settlement look on to the rescue efforts.

Residents of L & J informal settlement, who recently barricaded R21 and M57 demanding services, may be relocated to a new settlement pending finalisation of plans by the city council.

The Sowetan is reporting that “there is only one bucket toilet for 22 people living in one crammed yard” in the settlement that falls under Ekurhuleni municipality.

The paper is also reporting that “their government-issued mobile toilet takes two days to fill up, which often forces them to beg their neighbours to relieve themselves”.

The situation is apparently so bad that municipal workers who are charged with disposing the mobile toilets poke fun at residents, who they mock for “eating too much”.

The settlement, in existence since 1984 when a landowners allowed some his employees to build shacks, has mushroomed into a settlement of 3 000 shacks and an estimated 6 000 residents, according to the daily.

It is also a stone’s throw away from St Georges Hotel, when ANC holds some of its crucial meetings, including both national working committee (NWC) and national executive committee (NEC) gatherings.

Gugu Ndima, spokesperson for Mayor Mzwandile Masina, said the city is looking to “formalise” the settlement in light of complaints and even a memorandum previously handed to housing member of mayoral committee (MMC).

Ndima told The Citizen the mayor revealed plans to provide services, including sanitation, and relocate residents during the state of the city address (Soca). She says in a week’s time, during budget speech, the city will unveil full plans for the distraught residents who have accused the city council of indifference.

Ahead of local polls, Ekurhuleni's Masina concedes that coalitions will persist in SA
4 months ago
4 months ago

Ahead of local polls, Ekurhuleni's Masina concedes that coalitions will persist in SA
4 months ago
4 months ago