For safety reasons, the R55 is closed between 1st Avenue and Maunde Street. 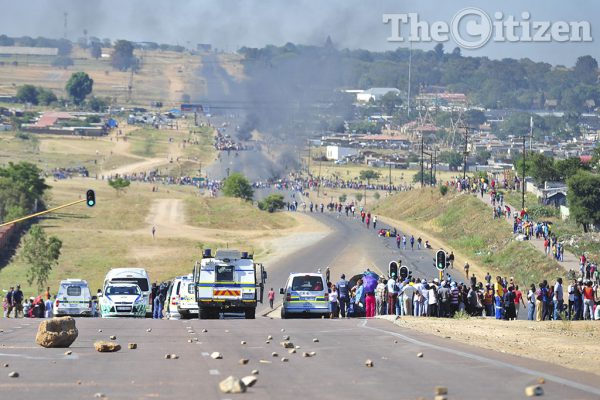 People protesting in Olievenhoutbosch blocked the R55 with rocks and burning tyres on 9 November 2015. The protest started around issues of allocation of RDP houses. Picture: Christine Vermooten

Motorists are advised to avoid the R55 near Laudium as residents of Itireleng informal settlement burned tyres and caused chaos in protest for improved service delivery.

According to a resident, who wished to remain anonymous, residents were “tired of empty promises”, as they felt their ward councillor failed to provide basic services such as toilets, decent roads and electricity.

“We are struggling. There are illegal connections that burn our shacks and kill our kids, as there are live wires in the streets. Our councillor must come and address us to tell us why there is no budget allocated to our ward. If no one comes to speak to us, we will protest until someone answers,” he told The Citizen.

Anti-crime activist Yusuf Abramjee said on his Twitter page that a man was attacked and killed during the unrest.

But Tshwane metro police spokesperson Senior Superintendent Isaac Mahamba could not yet confirm the death.

He said the violent demonstrations started in the early hours of the morning, leading to the closure of the R55.

“For safety reasons, the R55 is closed between 1st Avenue and Maunde Street. The situation is currently calm, and no arrests were made, but we will continue to monitor.”

He advised motorists and residents to avoid that cordoned-off section of the road.