Many dams are at satisfactory levels, although North West, Limpopo and Mpumalanga still face challenges. 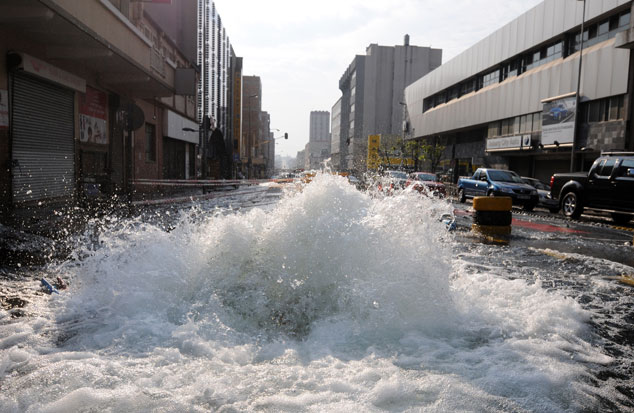 A burst water pipe at the corner of Commissioner street and Polly Sreets in Johannesburg, 13 September 2013 which left most of the businesses without water in the area. Picture: Nigel Sibanda

She said the study was done by the University of Stellenbosch and commissioned by the Water Research Commission in 2012.

“It is, therefore, of vital importance for government and communities to improve our ability to maintain the existing infrastructure to prevent and repair the current leaks in order to reduce the loss,” said Mokonyane during the indaba.

At the indaba, delegates will provide inputs on the drought and advise on how to create a sustainable water future for the country.

The country’s dams are currently at 77.2% of capacity, which is better than last year’s 54%. Last year, Cabinet declared eight provinces disaster areas, the only exception being Gauteng.

Many dams are at satisfactory levels, although North West, Limpopo and Mpumalanga still face challenges.

The minister said the Western Cape, hard-hit by drought, was experiencing serious water problems. The province has winter rain and dry summers.

A team comprising officials from the department of water and sanitation and the national disaster management committee were working with the province to ensure that short- to medium-term solutions were fast-tracked to guarantee the water security of the province.