Some of the placards, aimed at woman students protesting against sexual violence, read: 'Blow me,' and 'I'm not Asian, but I’ll eat you cat.' University of Pretoria students are stunned and outraged at the derogatory and insulting placards that were showcased during last night’s Serrie 2017 Finals, hours after a group of woman students protested topless against rape and sexual harassment on campus. About a hundred students complained that several students had been raped in the past nine months, and another had been sexually harassed over the weekend.

Hours later, students at the Serrie, an annual cultural event, held up placards that read: “Show us your tits”, “Blow me”, “I am not Asian but I’ll eat you cat”, “nice thigh gap, can I fill it”, “Kan ek ‘n boor in jou sit?” and “can I make you a momma”.

The Democratic Alliance’s (DA) Kwena Moloto, a student at Tukkies, posted on his Facebook that these were some of the disgusting and derogatory messages that young women were subjected to year after year at Serrie.

“Serrie has created a culture that normalises the objectifications and sexualisation of women. Radical transformation is needed at Tuks Res,” Moloto said. Fezekile Msimang, a journalist at the UP, said he was alerted and immediately responded by taking pictures of the posters. “I think it is trash. Naturally, I feel disgusted,” Msimang said.

He said although the majority of students were white, there were also black students partaking in this “terrible act”. 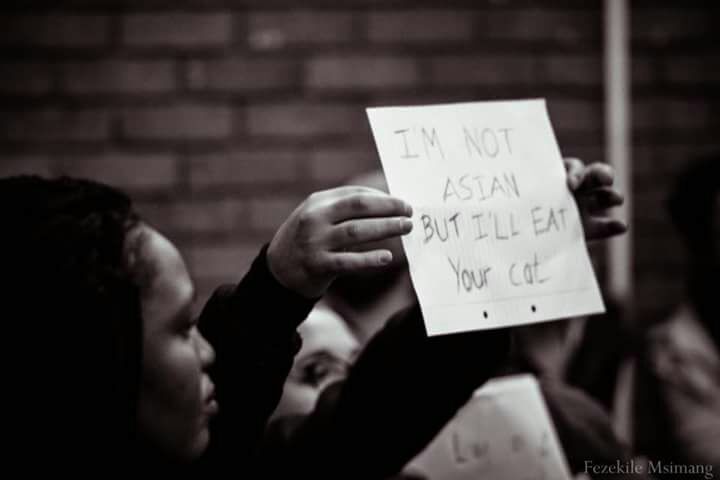 The act was condemned all over Facebook with people expressing their disgust. Johann van Eck wrote: “Disgusted, and the culprits think it is a joke. Says a lot of their upbringing. No respect for others. They should be banned from UP!”

DA councillor Siobhan Muller said she had already taken up the matter with the university management.

The students said Tuesday’s protest was the start of the “UP safety is a lie” campaign after a number of rape cases had been reported to the university management, but never addressed.

Lolla Ngobene said last year they held a symposium after the Are We Safe campaign and a memorandum was handed over to management. UP spokesperson Rikus Delport said they were not aware a memorandum had been handed over to the university, but that management had engaged with students last year to improve awareness as part of a campaign against sexual violence, and it would be repeated this year.