The City of Joburg fails to answer whether there is a valid court order for this eviction, while EFF warns the DA-led council there will be consequences 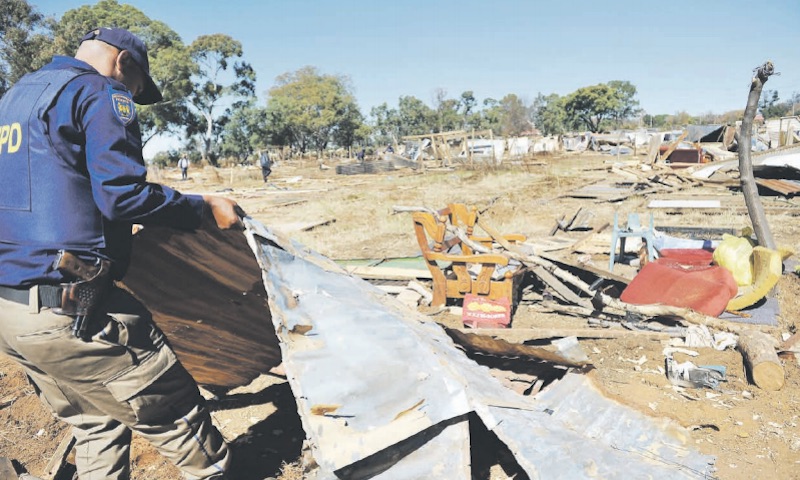 GONE. More than 500 shacks were destroyed by JMPD officers in the areas next to Jerusalem informal settlement on the West Rand. Picture: Tracy Lee Stark

Johannesburg Metropolitan Police Department (JMPD) are continuing with their eviction of Jerusalem squatter camp on the West Rand. And it appears JMPD police officers are doing so without a valid court order.

Chief superintendent Wayne Minnaar, spokesperson for JMPD, said the squatter settlement was being demolished because the occupants were in “contravention of city bylaws which states clearly that individuals cannot erect shacks on a property no hired or purchased”.

Asked whether there was a council resolution or court order to evict residents out in the cold in winter, Minnaar said: “The council is aware of the action,” and what prompted the JMPD to act was the increase the number of shacks.

Minnaar also disclosed that only part of the squatter camp had been demolished due to its illegality. When it was pointed out to him that the settlement, nestled between Witpoortjie and Florida CBD, was only demolished in part, Minnaar explained that this was because the shacks that were demolished were “illegal”.

He promised to get a full briefing of the commander in charge of the demolition. “Eventually all the structures will be destroyed, it is work in progress,” he said. Minnaar also admitted that the police in the area were battling with the situation and “had been waiting for backup to clear the roads”.

A legal representative for the community, Miriam Bareki, is adamant that the City failed to obtain a court order before carrying out this action. She confirmed that she has just left the squatter settlement and was heading to the Joburg CBD to seek an intervention on behalf of the residents.

Her claims were backed up by EFF caucus leader in Joburg council and chairperson of Joburg region Musa Novela. “The EFF sponsored a motion that barred JMPD from being used to carry out illegal evictions and that motion was adopted by the city. There is no court order for this eviction,” he said.

“The DA can not expect us to support them on this illegal eviction because we have long been saying that people must occupy land wherever they can find it. We subscribe to the principles of ‘sofasonke’ movement. We are going to use every avenue possible to oppose this eviction,” he added.