We regard reappointment of Molefe as illegal, public enterprises committee tells Eskom

MPs have told Eskom to clean its house, recommending a parliamentary committee inquiry and forensic audit. 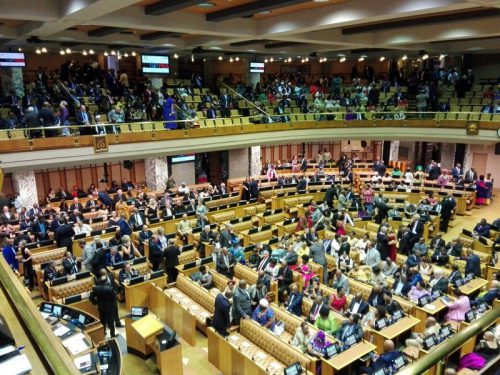 The portfolio committee on finance has told Public Enterprises Minister Lynne Brown and Eskom chairperson Dr Ben Ngubane that it is extremely concerned with the “breakdown of corporate governance” at the power utility.

The committee further told the state-owned entity’s management and the minister that it “views the appointment [of Brian Molefe] as illegal”, and will recommend to the National Assembly that Eskom be subjected to a parliamentary inquiry, and will be seeking legal advice on the legality of Molefe’s reappointment.

“We are not convinced as a committee. I don’t want to lie to you,” committee chairperson Zukiswa Rantho told the minister and Eskom delegates. She emphasised they would formally ask Eskom to furnish the committee with documentation that details the sequence of events that led to Molefe’s return to the power utility.

When the news of Eskom’s decision to reappoint Molefe surfaced, Rantho told The Citizen that it amounted to insolence and “Eskom cannot simply do what it wants to do” without accountability.

The meeting got off to a turbocharged start when the minister informed the committee she had withdrawn her support of Molefe. The DA and several amicus curiae are challenging the reappointment in court. The matter will be heard on May 31.

“As I told the media I believed there would be value in Molefe being back than paying him R30 million. I did not expect society not to accept the comeback nor the vitriol,” the minister told the meeting.

This triggered a heated exchange between committee members, with the minister and the Eskom delegation often displaying acrimony. The tension was further aggravated by Ngubane’s announcement that he would not discuss details of Molefe’s reappointment, as the matter was sub-judice.

“The portfolio committee is within its rights to ask for requisite information from the minister based on the report she has tabled before the committee. Where affidavits have been put to court, they have to explain the nature of the information so the members can have an understanding of the matter,” he said.

DA shadow minister of public enterprises Natasha Mazzone said the matter of Molefe’s reappointment had gone from “sublime to ridiculous”, and added “the name Molefe has gone from a noun to a verb. We will soon be telling our children don’t tell a Molefe.”

Mazzone later disclosed to the meeting that Eskom was suing her for R80 million using Cliffe Dekker Hofmeyr, a law firm contracted by the Eskom board to probe procurement transactions at Eskom. The minister and Eskom board members did not rebut this claim.

Former Ekurhuleni executive mayor Mondli Gungubele took the minister to task for her failure to dispense her duties in terms of a memorandum of incorporation (MOI) she signed in 2016 with Eskom, which gives her executive power to hire and fire and institute forensic investigations.

He asked the minister how she could only have found out in the media about such an important issue.

“What are the powers of the minister?” he asked.

EFF chief whip Floyd Shivambu urged the committee members to stop sugarcoating issues under discussion. “We know that the reason Brian Molefe returned to Eskom is because the Guptas failed to appoint him a minister [of finance] and he is back at Eskom to help the Guptas loot the state,” he offered.

John Steenhuisen of the DA wanted to know from the minister if he was instructed by President Zuma to rehire Molefe.

“I reported to the president and to the ANC top six leaders, as I often do,” the minister retorted.

Narend Singh, of the IFP, asked the committee whether Molefe had not committed perjury by taking an oath when he was sworn in as MP if he had been on extended leave. He told the minister that if she was reluctant to act, “we have decided as a committee we will use Rule 167, which empowers us a committee to probe Eskom”.

Recommending a parliamentary inquiry supplemented by a full forensic audit, former finance minister Pravin Gordhan, who is now an ordinary MP and a member of the committee, told MPs if they wanted to “connect the dots”, they must  interrogate decisions Molefe made at Transnet, where he had been the CFO.

“But we must ask this question. What kind of interactions do board members have with Oakbay as individuals? Let’s hear the truth,” the former minister challenged committee members.