Yesterday, the minister would not address calls for her to withdraw the statement. 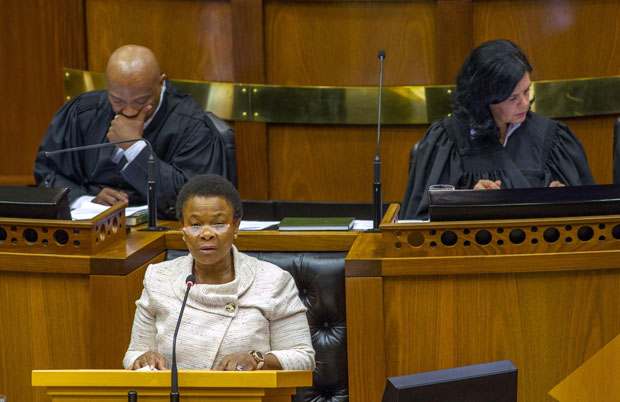 Minister for Women in the Presidency Susan Shabangu has taken steps to explain her comments that murder victim Karabo Mokoena, allegedly an abuse victim, had been “weak”.

Shabangu said in an interview with eNCA: “While Karabo came across as very strong, internally she was weak; hence she became a victim of women abuse and she tried to deal with her situation in sharing with other abused women. She ended up being a victim of abuse.”

Yesterday, the minister would not address calls for her to withdraw the statement, instead shifting her stance, saying women were “vulnerable”.

“Karabo was vulnerable. Karabo was in a relationship where she thought it would work for her, but it led to unfortunately the death of her,” Shabangu said.

She added: “I am a mother. I am a woman. I grew up in the township and I understand the pain, the pride of a woman, so there’s no way in which I can judge any situation without me understanding the pain and hurt that comes with that situation.

“It’s within that context that women become victims because they are vulnerable.” Several supporters took to social media to defend Shabangu, saying she was being misinterpreted.

Performance artist Ntsiki Mazwai tweeted: “I saw min Shabangu’s comments – I think she just used a provocative word. She is right … self-esteem has a lot to do with abuse.”

Commenting on the recent scourge of cases of femicide, rape and violence against women and girls, Police Minister Fikile Mbalula tweeted yesterday: “We must fix the law that when you report gender-based violence you can’t later withdraw. No women must be turned away from a police station.”

The South African Students Congress (Sasco) in Gauteng is calling on the authorities and communities to rally together to protect students who have often been the victims in several cases of abduction and violence against women.

“Students live in fear as they walk to and from their campuses because they are targeted by inhuman creatures who prey on them, especially defenceless females who walk home alone from campus, be it at night or during the day,” Sasco said in a statement.

Unacceptable for leaders to make sexual overtures, Shabangu on Radebe