#GuptaEmails reveal the then minister allegedly ensured the family and its businesses were given very special treatment. 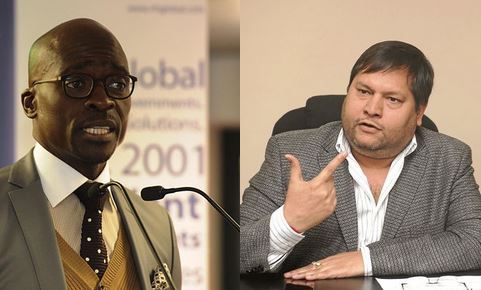 He is alleged to have facilitated the swift visa approval of Gupta-owned company employees and associates.

The email trail obtained by amaBhungane and the Daily Maverick details how the now finance minister might have played an active hand in ensuring the required visas were granted to applicants in a manner outside of normal protocol.

In an editorial preceding the explosive details of alleged home affairs capture, amaBhungane and Scorpio (the new investigate arm of the Daily Maverick), cautiously warn readers that a large part of the allegations remain untested and inconclusive.

They cite their inability to do so due to “reasonable grounds” that they may have been interdicted. The publications have also announced that they will house the emails in an offshore server and provide access to them to “bona fide” journaists on an ongoing basis.

They added the decision to release the tranche of emails at once was borne out of this past weekend’s first batch of emails “without context”.

In the section dealing with how Gupta companies obtained approval for Indian expats to do business and work in South Africa, Scorpio and amaBhungane appear to blow the lid on an intricate network of home affairs immigration officials, Gigaba’s close associates and third parties.

Although the actual letter was not attached, the exposé claims a home affairs official stated that Gigaba had signed an “instruction” for two officials to be moved to offices in Mumbai and New Delhi.

The primary objective of this operational decision, according to the emails, was to create pseudo-diplomatic status for the employees and businesspeople heading to South Africa.

READ MORE: We have done nothing wrong – VFS

Major Kobese, “a music producer and director in home affairs’ foreign office” is identified as the mastermind behind “Gigaba’s two Indian office appointments late in 2015”.

AmaBhungane and Scorpio have named those two officials as Gideon Christians and a “Ms Munyadziwa”. Christians is alleged to have also facilitated coal deal for a Chinese contingent.

While the investigation could not positively establish the said Ms Munyadziwa’s employment status with the department, it found out that one Khathu Munyadziwa was based in Mumbai in December 2015.

In one alleged email, Chawla wrote to Khathu Munyadziwa saying he hoped Munyadziwa was doing well and “enjoying Mumbai” before promptly issuing an instruction to the effect that visas submitted on the day the email was written must be ready the next day and sent “back to VFS”.

In April 2016 the DA alleged that the directors of VFS, a company awarded a tender to process visa applications on behalf of the department, were Duduzane Zuma and Rajesh Gupta AKA Tony Gupta.

The exposé further details that prior to the launch of ANN7 (a Gutpa-owned Midrand-based news and variety satellite TV station) in 2013, Sahara CEO Ashu Chawla “sent Christians many requests for expedited visa approvals”.

“The flow of emails was particularly strong as the new TV station sought to employ Indian nationals in South Africa,” according to the report.

“As you know, we are launching TV on 9th August so we need some more urgent visas to get the project running on time. Maybe I will request more in couple of days. Can you help me to get the below visa done today,” Chawla is alleged to have written in an email to Christians.

After this request was dispatched, it is further alleged Christians responded to Chawla by saying, “Nice one biya,” and Chawla then thanked Christians for his “continuous support”.

It appears Christians was not yet based at the SA High Commission in New Delhi at the time.

Further allegations include that at some point the Gupta-associated Indian delegates were banned from entering South Africa after they were found to have submitted fraudulent immigration details.

After Chawla was asked to “please help in [having] this ban removed, I did speak to Tonyji [apparently Tony Gupta] and he thus instructed me to take this up with you [sic]”, it is alleged he forwaded this request to Christians but is not clear whether the ban was lifted.

When the going got tough, the thread of emails seem to point out that Chawla relied on his pointsman, the minister of home affairs himself.

There was apparently a letter addressed to the minister, but sent to his former adviser [Thamsanqa] Msomi (currently a Denel nonexcutive director) “to try to get South African citizenship for three members of the Gupta family, including Ajay Gupta’s son”.

“Request you to reconsider the application which has been rejected by home affairs due to the fact that some of his family members have already acquired South African Citizenship and they have successful business running in South Africa.”

It is also alleged that in February 2016 “Chawla arranged to fly Msomi to Dubai and put him up at the luxurious Oberoi Hotel for a few days”.

However, the exposé also indicates how principled home affairs officials refused to idly watch while visa regulations were short-circuited, and in some instances completely ignored, for the benefit of Indian nationals seeking their way to greener pastures in South Africa.

Irregularities were reportedly pointed out in the seconding of the two officials to India based on breaches of departmental policies and both posts not having been budgeted for. Kobese was reminded that “this deployment was done outside the normal recruitment process”.

Kobese is alleged to have pulled rank over those reported to have tried to exercise due diligence by writing “Please note that a decision has been taken by Minister [Gigaba] to deploy both Mr Christians and Ms Munyadziwa. Our role is to carry the Minister’s instruction.”

Kobese, wearing his music producer hat, is accused of having tried to negotiate publicity deals with ANN7 by sending “songs he produced to Chawla, in the hope that they would be used on TV”.

“I read on yesterday’s paper that your guys on ANN7 [the Guptas’ TV station] are working on second season of I Am a South African. I think this song will fit the concept of this program. Please listen to it and give me feedback,” he is alleged to have written.