The judgment handed down means the EFF leader will be expected to testify when his case is finally heard in court. 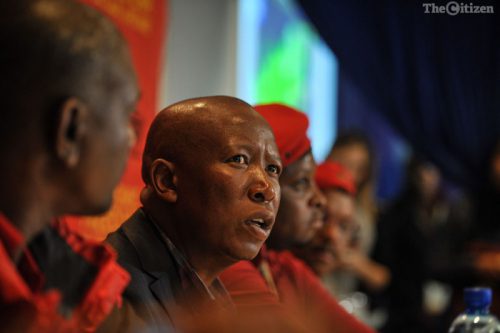 The South African Revenue Service (Sars) may not appeal against a ruling by controversial former judge Mabel Jansen referring its tax dispute with EFF leader Julius Malema for oral evidence.

Judge Jansen, who has since resigned, in April last year referred Malema’s application against Sars for oral evidence, saying the disputes in the matter could not be determined in the papers.

Malema had asked the court to declare that his 2014 compromise agreement with Sars to pay off part of his tax debt of more than R18.1 million was binding on Sars and that he had fully complied with it by paying off more than R7.2 million.

Sars maintained it was no longer bound by the agreement because Malema had failed to make “full and frank disclosure” of his tax affairs and could therefore be held liable for back taxes of more than R32.9 million.

Malema, who accused Sars of “political skulduggery”, insisted he should not have been taxed on donations, but Sars accused him of failing to reveal the true source of his donations, not keeping his tax affairs up to date, not paying donations tax and failing to disclose his interest in a Polokwane property.

Sars complained that Judge Jansen had misconstrued the dispute between them and Malema, and had “half-cooked” the issue by wrongly making “findings” on some of the disputed facts.

The tax agency said the court should have found that it was not bound by the compromise agreement.

Judge Tati Makgoka said Sars was clearly seeking to challenge Judge Jansen’s statements in the course of the judgment, but this was impermissible, as it could not appeal against the reasons for the judgment.

He said nothing had been determined yet, and Judge Jansen’s order was not definitive of any issue between the parties, and was merely a preparatory one for the determination of the real dispute.

He said the judge had exercised a discretion by referring the matter to trial, and there was no suggestion that the discretion had been exercised capriciously or upon a wrong principle.

He was not persuaded that an appeal would lead to a just and prompt resolution of the dispute, there were no compelling reasons why the appeal should be heard, and it was not in the interest of justice to do so, Judge Makgoka added.

Judge Jansen resigned last month after a public furor about her 2015 comments on Facebook about black men and rape.