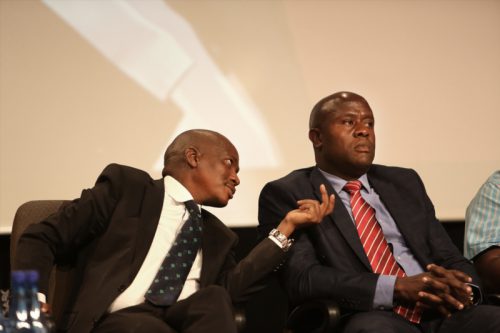 Deputy chairperson of interim SABC board and former executive director of Sanef Mathata Tsedu this morning said if any journalist at the public broadcaster were to be instructed to report in a manner that is inconsistent with ethical journalistic practices, they must report the matter to the board.

“We are there as a soundboard, and they can report such orders to the board,” Tsedu said, emphasising the broadcaster would be reverting to the 2014 editorial code that former communications minister Faith Muthambi and axed COO Hlaudi Motsoeneng tried sidelining.

Tsedu further told Leanne Manas during a Morning Live interview the interim board would be seeking the help of media experts, civil society and the journalists themselves during workshops to be held in different provinces.

“We will be looking at what it means to be a journalist for the public broadcaster and how they must report,” Tsedu told a visibly pleased Manas, who said “it was good to know we [SABC journalists] are protected”.

The matter came to a climax during the run-up to the 2016 local government elections when Motsoeng banned service delivery strike packages on SABC news because of the likelihood of other communities emulating the often violent and destructive protests.

Tsedu also confirmed the public broadcaster had been, as chairperson Khanyisile Kweyama told the media yesterday, “stealing from Peter to pay Paul”, with board members currently not receiving board fees for the work they had been doing.

Tsedu disclosed that some production companies had opted to not receive payments from the broadcaster for the next three months, while others specified the minimum monthly payments the broadcaster could make to ensure it remained afloat while the board waited for government guarantee that National Treasury was currently considering.

Tsedu was at pains to assure Manas that he and fellow board members were working round the clock to resolve the issue of outstanding payments and the cashflow needed to service the broadcaster payroll.

Meanwhile, the SABC is expected to post a loss of more than a billion rand due to the 90% – 10% content policy unilaterally introduced by Motsoeneng across all the broadcaster’s radio stations in 2016.